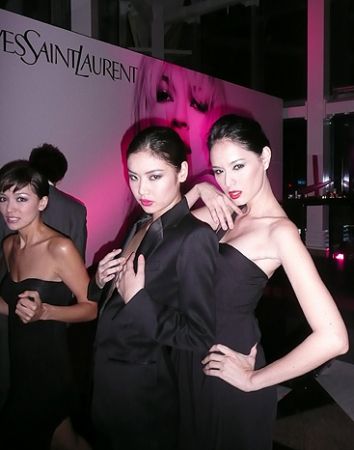 Last week, Yves Saint Laurent held an event to celebrate thirty years of YSL cosmetics. The venue for the night was The Apex, a unique space on the 75th floor of Central Plaza, Wanchai’s tallest building. The Apex is structured something like a three-story glass pyramid. The 360-degree views from the inside are spectacular. Standing in The Apex you feel like you’re flying above the city.

The view down below wasn’t the only dazzling draw. Three of Hong Kong’s top models, Gaile, Ana R. and Cara G. were on hand to lend star power to the evening.

Having rained earlier in the day, the visibility was clear at night time.

Central Plaza, which used to be Hong Kong’s second tallest building, towers over its neighbors in Wanchai.

The triangle at the very top of the building (below the antenna) is The Apex.

The YSL event got off to a good start with a group of vocalists singing acapella. It’s refreshing to hear something different, even if just briefly.

The show itself was a series of skits. In the first, models Cara G. and Ana R. were applying make-up in front of a mirror. The second part featured two models posing before a photographer.

The third section featured Gaile being made up as if she were backstage in a pre-show cosmetics session. A YSL makeup artist from France was the guest star, attending to the models. Afterwards the whole group gathered around on stage for photo-ops.

For a small to medium sized event, The Apex is a great space. I’ve been here previously for a Pinko event last year. Despite the fact that it takes three different elevators to reach the venue, it’s worth it!