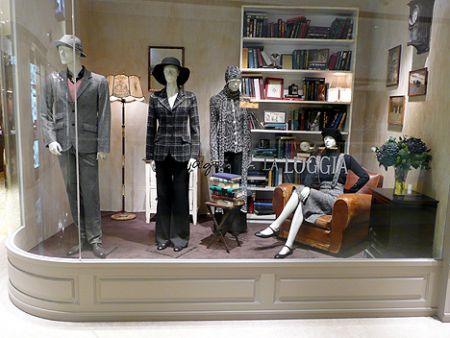 Agnes B. La Loggia within the IFC shopping center

European and American luxury brands once viewed shopping malls as the opposite end of the spectrum. Malls were derided as down-market, lacking in ambiance, sterile, suburban, and without unique value.

But in order to reach their target customer most efficiently, they have had to compromise. Particularly in Asia, there are occasionally differences between the label’s vision of luxury and the shopping patterns of consumers.

One crucial area where this rift surfaces is in choosing a location for a flagship store.

Traditionally, fashion houses favored stand-alone shops where they could create a total environment based around the brand’s identity. But in many cities in Asia, luxury consumers prefer a shopping mall above individual shops.

This is partially out of necessity due to the sprawling nature of the cities, as well as problems such as traffic and street crime.

In many big cities, shopping centers are viewed as the height of modernity and exclusivity. They represent a safe haven away from the chaos of city streets. Luxury consumers, particularly from South East Asia, prefer a sterile, controlled environment, distant from the traffic, masses, pollution and crime.

Though certainly less threatening than its regional neighbors, Hong Kong offers interesting hybrid solutions that are a compromise of both stand-alone and shopping mall location.

One example that immediately comes to mind is Agnes b.’s La Loggia. Situated inside the IFC shopping center, La Loggia is remarkable on several levels. First is its impressive size – La Loggia practically takes up an entire wing of the building. Second is the amount at which they’ve been able to customize the surroundings.

Once inside, you feel as though you’re not in a shopping mall, but ensconced in an Agnes b. world. This is difficult to do because many things such as lighting and floors, etc. are typically standardized in shopping centers. Creating La Loggia, they were given considerable freedom in changing basic elements. They even constricted the normal passageway of the mall.

Being attached to, or housed in a shopping center does offer several advantages over a stand-alone shop.

Stand-alone stores are destination shops that require specific effort to visit, but being located in a mall allows consumers to wander in while they browse multiple brands freely under one roof. This perhaps makes shoppers more likely to visit, which leads to greater foot-traffic and ultimately more sales.

There can also be significant collateral visits since shopping centers in urban Asia also serve as transportation hubs or are home to major office towers.

Below, Louis Vuitton and Gucci anchor different ends of The Landmark shopping center in Central.

On Lan Street: a stand-alone oasis in Central

Another interesting case in the opposite direction is On Lan Street.

The shops occupy old townhouse buildings that are four stories tall. With D-mop, a high-fashion retailer on the opposite side of the street, as well as Diesel and Visvim just around the corner, the densely-packed location is a special shopping experience that balances convenience with distinct, individual stores.

[photopress:BBC_Ice_Cream_Shop_HK_1.jpg,full,pp_image] the facade of the Billionaire Boys Club / Ice Cream shop on On Lan Street