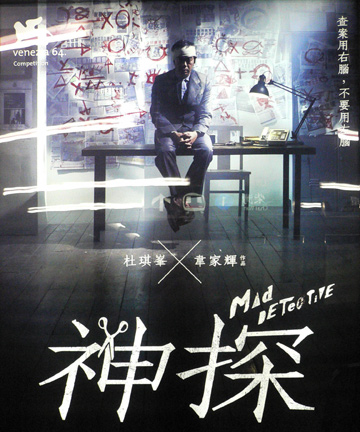 Feeling kind of bored on Tuesday night, I decided to head over to Causeway Bay to catch Lau Ching Wan‘s new film, Mad Detective. The movie was directed by long time collaborators Johnnie To and Wai Ka Fai, who have created some of my favorite contemporary Hong Kong films. While they often take on different genres, there’s always something quirky about their work that I like.

An entertaining, intricately woven morality tale, Mad Detective represents a significant triumph for the two directors. Here Johnnie To and Wai Ka Fai have perfected a kind of concept they have been dabbling with for a decade. Not only were they able to pull off employing challenging sub-scenarios within the film, they made these complex devices both gripping and moving. This was not lazy filmmaking.

The opening scene establishes the genius of the main character, a detective who uses seemingly bizarre techniques to solve crimes. As the story unfolds, his ability or gift is soon deftly revealed in a sequence that will surely stand out as one of the finest in recent Hong Kong cinema history.

Mad Detective has a retro feel to it that I couldn’t quite place. It’s a mature, sophisticated work that goes far beyond the skits or twists that normally pop up in a Johnnie To / Wai Ka Fai production. Mad Detective never goes overboard or loses the audience. The suspension of disbelief, the Achilles heel of most Hong Kong concept films, never once reared its head. Thankfully the film didn’t pander to the audience’s sense of humor either.

The Mad Detective is an impressive work that will be an instant classic among Hong Kong film fans. Thoroughly engaging, it has elements of suspense, romance, action and mystery. Mad Detective has potential to do well internationally as well as regionally (particularly in Japan and Korea.) Highly recommended!

A note about cinemas in Causeway Bay

While most people head to movie theaters in Times Square or Windsor House, both major shopping centers in Causeway Bay, I stick with the JP (my favorite) or the President Theatre if I have a choice. The original President Theatre was torn down a few years ago. The new incarnation contains added shopping space to maximize its prime location in Causeway Bay. As far as this type of procedure goes, they did an excellent job, and the new cinema is a good place to watch a film. Since Tuesdays are reduced price day, I bought my ticket for just $45 HKD at the President!