What could be cooler than hosting a launch event in a toy showroom? With super-sized vinyl figures and other interesting props scattered about, it’s hard not to just be awed by the atmosphere.

Toy designer Chris Kong collaborated with Vans OTW to release a special signature shoe at his workshop on February first. His company, Garage Works, has collaborated with, and produced vinyl figures by several notable artists including Ron English and Jim Phillips.

The launch event drew a collection of media, celebrities, scenesters, and friends of the designer, who busily snapped away at the sneakers and other items spread throughout the showroom.

Designer Chris Kong is the guy in the hat

With his creative background, one would expect Chris to have designed a cool shoe, and his customized version of the Vans Alomar sneaker doesn’t disappoint! 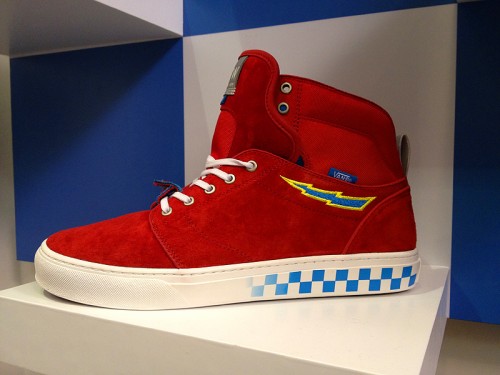 In sharp red color, with a lightening bolt on the side, the model is unique.

Looking at the sneaker, it immediately conjures up a Flash Gordon / Shazam kind of vibe due to the color scheme and lightening bolt.

The detailing on the bottom side of the shoe, a fading checkerboard pattern, is incorporating a classic Vans design that was captured in the influential 1982 movie “Fast Times At Ridgemont High” on actor Sean Penn. The checkerboard is also reminiscent of the popular BMX bike pads from the 1980’s. (Chris is a major fan of old-school BMX bikes and has both a Skyway and a Kuwahara on display in his showroom.)

Vans produced a special video shot in Hong Kong of Chris talking about his influences that you can check out here.