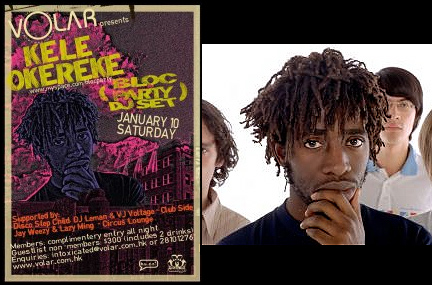 Trust me, Saturday night at Volar is going to be rocking! The lead singer and guitar player from Bloc Party, Kele Okereke is playing a special d.j. set. If you haven’t heard of Bloc Party, they are simply one of the best bands to come out in the last ten years. Their music is fast, catchy and will drive the dance floor berserk!

Bloc Party’s debut album is one of those classics that’s filled with hits. The album also spawned a string of remixes produced by a who’s who of contemporary dance music.

In addition to special mixes of Bloc Party’s music, the night also claims to contain songs that influenced the group’s sound. This should feature a diverse variety since the group taps the sounds of multiple genres including Indie Rock and dance music. It will be a real treat to hear Kele Okereke’s selections.

Disco Step Child will be opening up! This should make for a crazy night!
Recommended!