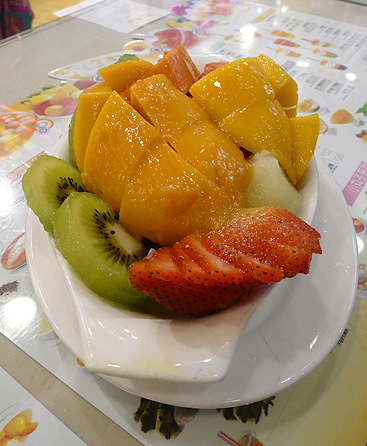 There are countless choices for dessert in Hong Kong, but for this post I’m going to focus on several major chains that you’re likely to stumble upon in popular neighborhoods. Perhaps you’ve seen them before but have no idea what they sell. Think of this as the key to unlocking their pleasures!

Hui Lau Shan
What can I say about this place? I practically moved to Hong Kong because I was at one time addicted to a drink that they offered. They specialize in a colorful array of fruit desserts and drinks. You can often spot people waiting outside the storefront to grab a drink on the run. Step inside and you’ll see tables with stools and occasionally booths. Normally there will be picture menus in Chinese and English under the glass tabletop to make selecting a dessert easy in any language. Simply point to your desired choice. Sometimes sitting on top of the table there will be a small flip menu that shows a special for each day of the week.

Hui Lau Shan specializes in mangoes. Mango ice-cream, mango-pudding, mango juice, they have it all and then some! The desserts can be extremely colorful and combine a medley of different fruits.

Try the mango and coconut ice cream with a side of mixed fruit. (It’s on the main menu under the glass.) The combination’s delicious and always hits the spot!

Somehow I feel less guilty snacking on these fruit dishes than I do with baked goods. The cost is relatively cheap. The sets usually go for under $32 HKD.

Of all the dessert restaurants, Hui Lau Shan has the most locations with forty-one branches in Hong Kong, Kowloon and the New Territories. You can spot them by their red exterior, often with gold or yellow characters.

You’ll also see a counter at the very front and posters of the drinks hanging down. Just walk in and sit down if there are seats. If the place seems full, let the waitress direct you to a spot.

Moon Kee or Honeymoon Dessert
The most famous branch of Honey Moon Dessert is at the start of Sai Kung town, but they have branches all over the city. The Chinese name is Moon Kee, pronounced ‘moon gay’. The desserts here are different from Hui Lau Shan. While they also specialize in fruits, they offer other creations such as things like banana pancakes and also fruit mixed with sago and sweetened tofu. Some of these dishes are like a sweet fruit soup.

Durian, the controversial fruit, is also popular at Moon Kee and available in many forms. The menu here is in Chinese and English and they also have photos.

The decor and branding here isn’t as flashy, trendy or modern as the fruit desserts above, but it specializes in a delicious milk pudding!

Hey, sometimes you just want chocolate pudding, and this is the place! This is not the kind of artificial pudding you may have grown up with. At Yee Shun it’s made fresh and is chilling (literally) in the window of the shop.

It’s sweet and light and served at the perfect temperature with a dash of powdered chocolate on top. You can choose either hot or cold. I’m not sure if they have an English menu, but I suspect that they do. The waiter will ask you what you want, and then ask you if you want it hot or cold. To order the pudding, you say in Cantonese (pronounced like the English words) ‘done lie’. To order a cold chocolate pudding you’d say something like: ‘dong gee-co-lick done lie’ which would mean cold chocolate pudding! If you want to simplify it, first say ‘done-lie,’ then ‘gee-co-lik’ for chocolate (they also offer other flavors,) and then ‘dong’ for cold. If that doesn’t work, it’s also easy to just get up and point!

To find Yee Shun Milk Company, just look for a place with stacks of pudding in the window!

Saint’s Alp Teahouse
Another fine delicacy that provides a place to chill and have a snack is the oddly named Saint’s Alp Teahouse. This joint is easy to identify by their logo of a large footprint. Originally a Taiwanese treat, they specialize in tea drinks. They have a menu with lots of fancy colored drinks. Stay away from them. The best drink here is the basic milk tea with tapioca. (On the menu it’s Black Tea with Milk under ‘Frothy-Tea with Pearl Tapioca’)

In the U.S. they call this ‘bubble tea’ because of the large tapioca inside. You suck the chewy morsels out with a huge straw! They have a menu in English here if you need it. They will ask you two questions: big or small and also hot or cold. For an additional snack, they also serve ‘pillow toast’ which is a thick piece of bread with peanut butter, condensed milk, or some sort of jam spread on top. All are delicious.

Stay away from the other snacks, and focus your attention on the tea and toast.

Tsui Wah
O.K. this isn’t a dessert place, but I’d like to point out an often overlooked local delicacy on their menu. Right now it’s even featured under the glass tabletop at their booths with the other specials. For those who don’t know, Tsui Wah is a famous local eatery chain that’s popular with the late-night crowd. They have several branches in Causeway Bay, a notorious branch in Central right at the foot of Lan Kwai Fong (opposite Yung Kee) and a newly opened branch in Tsim Sha Tsui, among others.

They sell a toasted roll with butter and condensed milk on top that’s simply amazing. It’s listed on the menu as ‘crispy bun w/ condensed milk’. Order one! Combine that with your favorite drink and you’ll be in heaven.

Special tip: When you order at all of the places above, the waiter will fill out a ticket and place it under your glass tabletop. When you’re ready to pay, simply grab the ticket and proceed to the payment counter near the entrance.

In a subsequent post I’ll be covering other dessert spots around town. Just don’t blame Hong Kong Hustle if you gain a little weight!