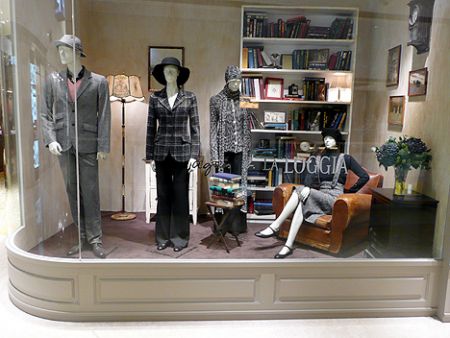 Fashion designer AgnÃ¨s B. was in town to celebrate the opening of a sprawling new complex made up entirely of boutiques bearing her name. Featuring a patchwork of clothing stores as well as a cafe, a restaurant, a chocolate shop, a florist and a travel shop, it takes up an entire wing of the IFC shopping center. Named La Loggia, it’s a major addition to the mall and an interesting new retail concept.

How did Agnes B. mark the opening?

With a major party!

The La Loggia opening event
The celebration was held at The Watermark restaurant, just outside the IFC mall. Even for a Saturday night there was a huge turnout.

Though the entertainment featured two French d.j.s, the highlight was a band from Brooklyn named Au Revoir Simone, who Agnes specifically selected to perform for the occasion.

At several points the band had the crowd dancing along to music they hadn’t heard before – a very difficult feat! Au Revoir Simone plays a type of Indie Electro that borders on Pop. Performing around eight songs, the trio sounded great live, with consistent singing and strong instrumental skills. Putting on a tight show in a party atmosphere is something tough to achieve.

Au Revoir Simone’s music brought Agnes B. down from her perch in the VIP area to dance in front of the stage.

The mood was contagious and the tightly packed crowd grooved along. (For more on Au Revoir Simone, check out their MySpace page, or watch their videos on YouTube.)

Creating a single-brand oasis within a shopping mall

While having a flagship store within a mall is nothing new, creating a branded world within a shopping center does seem like a departure.

I stopped by La Loggia for a look this weekend. It takes up one side of the third floor of the IFC mall, a location that wasn’t the most popular with shoppers.

The first thing I noticed is that much has been done to disguise the fact that you are walking through a shopping mall interior. They have installed several banks of display windows which break up the entrance way.

A different type of patterned floor has also been installed and there are interior facades built to resemble individual shops.

The result is a much warmer space. The area is divided in two by the mall atrium. One side contains most of the clothing stores, while the other side includes the cafe, restaurant, chocolate shop, travel boutique and florist.

The closest to this multi-shop formula I can think of is Armani’s presence in nearby Chater House. In that building they house a florist, a book store, a restaurant / bar, a home furnishings boutique and several clothing stores using a similar structure. Yet that layout doesn’t compare with taking over an entire section of a major shopping mall. Agnes B’s La Loggia, with its multi-shop, single-designer strategy seems like something new.