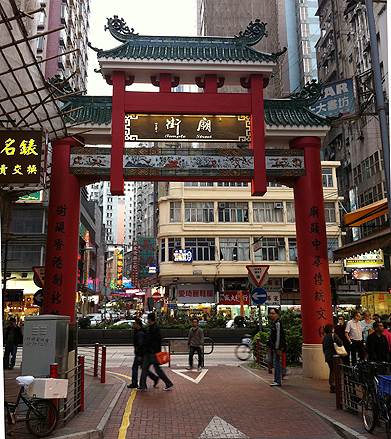 Construction started over a year ago on two grand archways at the beginning and end of the Temple Street night market in Jordan. Passing by recently, the finished product seems more at home at a Taipei night market than in Hong Kong’s urban landscape.

While it may make the popular street market more photogenic for tourists, it actually stands out because Hong Kong doesn’t typically go in for ostentatious ‘oriental’ design.

In fact, after a brief walk around our cosmopolitan city, foreigners have been known to ask bewilderedly, “Where’s Chinatown?”

The territory’s unique history, (as a British colony pre-1997,) and its obsession with modernity, often results in architecture without overt displays of Chinese heritage.

Though Hong Kong is very much a Chinese city, there are few ostentatious displays on a grand architectural scale. By contrast, compare this with buildings such as Taipei 101, or numerous contemporary structures in cities such as Shenzhen, that weave together traditional Chinese traits with modern design.

Perhaps another factor is Hong Kong’s constant lack of space, which leaves little room for experimentation, and leans more towards sober practicality.