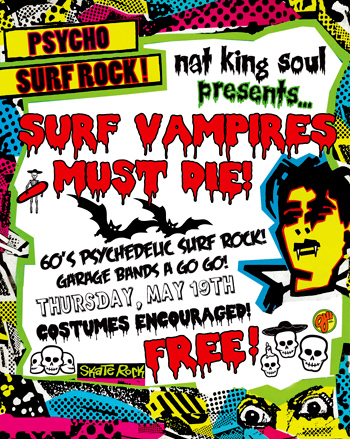 What would the music be like at a haunted house party on Hawaii’s North Shore? A new party named Surf Vampires Must Die! answers that question with a night filled with “60’s Psychedelic Surf Rock and Garage Bands A Go Go.”

The d.j. behind the party works with fashion heavyweights such as Chanel, Chloe, and Versace, and is known for his creative musical selections. Expect authentic surf sounds from the 1960’s as well as little known garage band gems from around the world.

Few genres of music are as fun to party to as Surf Rock, which is why its been sampled by The Black Eyed Peas, and appeared in movies such as Pulp Fiction.

Surf Vampires Must Die! takes place at FLY on Ice House Street in Central, and is free!

From 10pm til late
FREE!