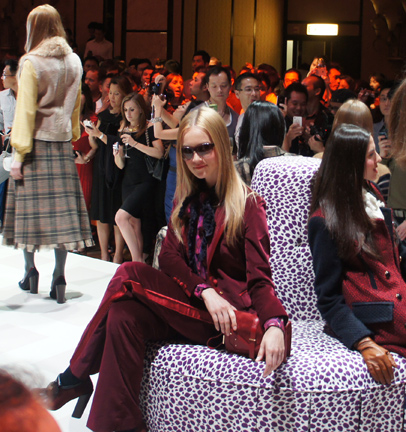 Opening a store in Central’s IFC shopping mall in December 2010, the brand is still establishing itself in the city, its first foothold in Asia. As is the case with most brands looking for expansion in flat economies, all roads point to China.

The last few years have brought a wave of newer designers to Hong Kong’s shoppers. A kick-off event in the city is a good investment, as enlisting the right celebrities, models and personalities, covered by a broad range of media, helps disperse brand-awareness throughout the region.

Though the event featured a presentation, rather than an actual fashion show (with the models just standing in place, slightly dancing,) the crowd responded to the music and got excited. Perhaps this alternative approach was a stroke of genius, as scores of iPhones and Blackberrys could be seen in the air, capturing the models’ outfits.

Using the same d.j. who presided over American president Obama’s inauguration party, the skillfully chosen tunes kept things lively throughout the night. New York-based DJ Cassidy was a smart choice as his party-friendly music also appealed to the broad age range in attendance.

The designer, and brand namesake, Tory Burch, posed with party-goers for easily thirty minutes after the show. This kind of personal attention goes a long way in creating a bond with consumers, especially in today’s Weibo and Facebook social-networked climate.

For a look at the finale of the presentation, check out the video here: