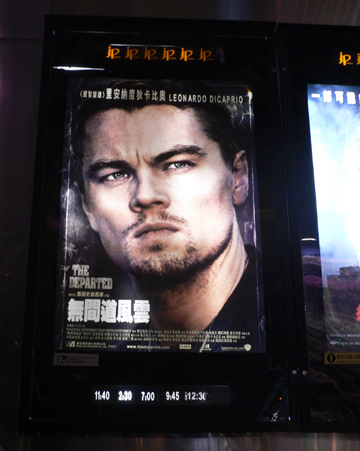 It’s been a month or two since I watched The Departed, the Hollywood remake of the Hong Kong film, Infernal Affairs. I can’t help wondering what it would’ve been like to have just seen The Departed, without knowledge of its predecessor.

I went into the film unbiased. I’m a Scorcese fan, and I’ve enjoyed many of his crime films in particular.

My first reaction – I didn’t like the fact that The Departed was set in Boston. The urban vibe of Infernal Affairs was lost. There didn’t seem to be much of a neighborhood feel that you have when films are set in New York.

It was also strange that the film was based on a bunch of Irish gangsters rather than Italians. Why the twist? Because Matt Damon can’t do an accent apart from the Boston brogue?

The film had little magic or suspense compared to other Scorcese films and the original from which it was based. It just wasn’t brought to a boil the way Infernal Affairs gradually turned up the heat.

One particularly faulty part of the film dealt with the Chinese government attempting to buy stolen technology. It was a clumsy addition to the plot that came off badly. Audiences in the cinema here in Hong Kong were laughing in their seats. The poorly chosen actor spoke Cantonese, rather than Mandarin – the official language of the PRC, plus he was utterly unconvincing in his small role.

With Hollywood borrowing more and more from Asia in recent years it’s sad to see that attention to detail still remains the exception rather than the rule.

Despite the dream team of acting and directing talent, The Departed failed to equal the foreboding intensity of Infernal Affairs.