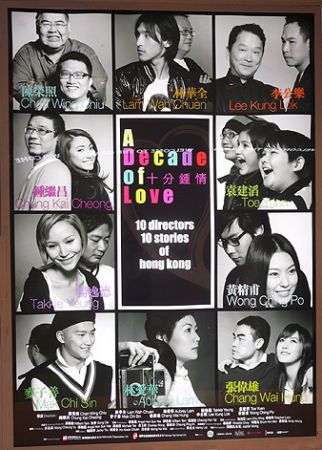 Last night I checked out the premier of A Decade of Love, a film that was originally supposed to be screened as part of the Hong Kong International Film Festival back in March. Similarly structured to Paris, Je t’aime, the movie is a mixture of ten stories, each with a different director and cast. Every story centers around the concept of love.

A Decade of Love was a success in that it delivered vastly distinct stories portraying different aspects of love. Some were traditional love stories, others dealt with love between friends, colleagues or family. Several focused on broken love, while others were simply unconventional.

The story lines for the most part were good. The film was surprisingly even in quality. It’s not easy to manage that many stories and maintain the same consistency throughout. The production was packed with celebrities including Ana R., Amanda Strang, Carl Ng, Race Wong, and many others.

A Decade of Love was screened as part of the Summer program of the Hong Kong International Film Festival. You can check out what else is screening in the festival at the HKIFF site.