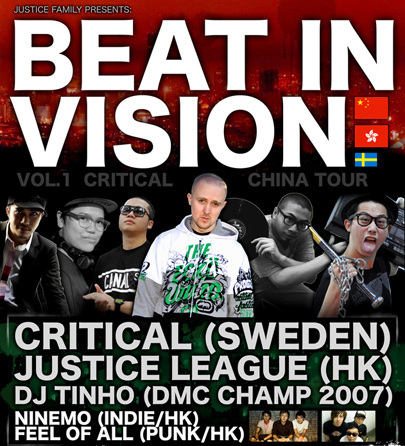 The upcoming “Beat in Vision” show at The Fringe Club on Saturday night promises a little something for everyone. At the top of the bill is Critical, an accomplished M.C. from Sweden who is active in the European Hip Hop scene. Second in line is The Justice League comprised of MastaMic and Big Sammy, two promising talents in Hong Kong’s Hip Hop underground. D.J. Tinho, the 2007 Hong Kong DMC champion will also be lending his support.

As if that wasn’t enough, the flier also mentions the inclusion of Ninemo, an indie Electro-Rock band, and Feel of All, a Hong Kong Punk band. That’s an awful lot of music for a $100 HKD cover charge that includes one beer!

The event kicks off at The Fringe club, a Hong Kong institution for art and music shows. The building itself is an attraction as one of the few older colonial structures left standing. It also features a classic rooftop bar.

The fact that it’s a relatively small venue means that this could be a fun, interactive show. At the very least, with so many different genres of music, it should make for good people watching!

MastaMic of the Justice League was a person of interest in our story about Hong Kong Hip Hop a few months ago. His skills appear to be top notch. I like how these guys have used the Internet to promote their upcoming show. Check out the short promo video they’ve made below: