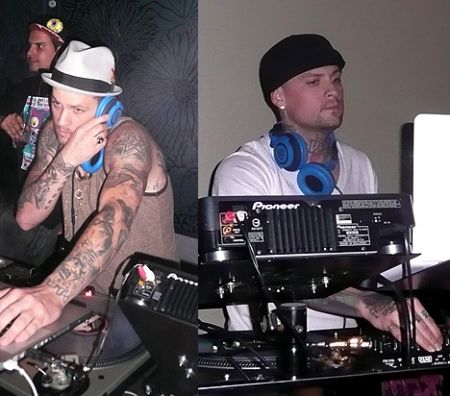 Over a two day period, Hong Kong hosted back-to-back d.j. sets by twin brothers, Joel and Benji Madden. Joel d.j.ed at Roxie on Thursday night, and Benji followed up with a set at Volar on Friday.

Both brothers are members of the band Good Charlotte and are frequent gossip column protagonists. I was curious how they would stack up against each other on the wheels of steel!

To be honest, it wasn’t exactly a fair competition.

Joel Madden had the clear advantage. The turnout at Roxie on Thursday the fifth was excellent. The cool crowd invited to attend was limbered up by two hours of free flowing Veuve Clicquot before Joel’s set began. If he had banged two rocks together, people probably would have been happy!

As things got underway, Joel played a solid, cohesive set. For the first hour he steered clear of top-40 cliches (any amateur can play that,) and instead focused on more underground dance music. Interestingly, he didn’t play any Rock while I was there.

After about an hour and a half he began to slow down the tempo, and play a few more well-known songs. At that point, I was starting to get antsy, and decided to hit another spot.

Celebrity d.j.s
I like the idea of popular musicians also performing individually as d.j.s.. Hearing them spin can offer a look inside their musical mind. It can expose some of their influences and provide a chance to discover music that they think is cool.

This is especially the case with accomplished musicians. D.j.ing is a good way for them to escape their own music and perhaps show another side that they wouldn’t normally have a chance to flaunt while performing with their band.

Sometimes however, these d.j. stints can backfire. Perhaps the biggest disappointment of the year was when Kele Okereke, the lead singer of the band Bloc Party, d.j.ed at Volar. Getting on stage, he clearly didn’t know what he was doing, as his assistant picked out most of the songs! It was unfathomable for Bloc Party fans to think that such a talented guy could play such a lackluster set. After that experience, every other celebrity d.j. arriving in Hong Kong has been met with a degree of skepticism.

Benji Madden d.j.ing at Volar
When Benji took the stage at 2am at Volar on Friday night he had his work cut out for him. Many in the crowd had been partying hard since Wednesday night, and Thursday was a particularly late one. Getting people hyped up again after a heavy few nights in a row isn’t easy.

Benji’s 2am start time at Volar was, believe it or not, still a little on the early side! Prime time has recently shifted to 2:30 in the morning! To further complicate things, Volar has two rooms, and as guests started filtering in, they scattered into both rooms, leaving the main side where Benji was playing, slightly empty.

Though the front of the stage was packed, at first he wasn’t playing to a full room. This often makes a d.j. schizophrenic. Instead of sticking to one genre, they’ll sometimes jump around musically in an attempt to get the entire place going. If they can’t hit the right musical combination it has the opposite effect – the music comes across as inconsistent, and they lose some momentum. Though he initially lost some steam, Benji’s set started to take off a little after three am.

The winner of this round? Joel Madden! However, given all the factors, Benji faced a much more difficult scenario.