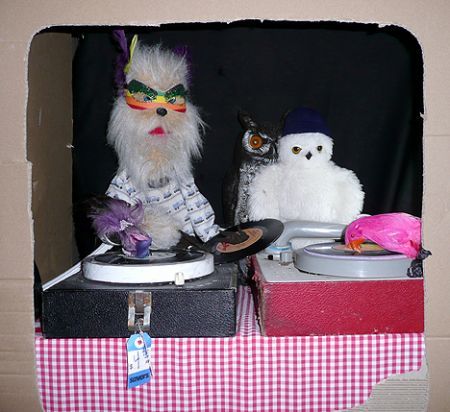 I’m not sure who’s worse, Hong Kong’s d.j.s who play the same Top 40 music over and over again, or the crowd that expects to hear only songs they know. This isn’t the way nightlife should work.

Think of it this way – do you eat the same food every night for dinner? No? Why not? Because it gets boring! Then why do you want the music to be the same every time you go out, everywhere you go?

Things weren’t always like this. Let’s take a trip back in time and see how clubs and d.j.s are supposed to function.

Not so long ago, people went out specifically for music. You went to a club based on the kind of music they played. Rock people went to one club, Hip Hop fans to another, and Techno lovers someplace else. (Perhaps music once played a much larger role in defining the individual in society?)

In the past, when you went out to a club, you expected the d.j. to introduce you to NEW songs. You’d think the d.j. was terrible if he only played songs you’d know. Think about it – shouldn’t a professional, someone who devotes their life to playing music, have a better knowledge than the average person?

In the old days, a d.j. became a d.j. as an outgrowth of their love of music. They were driven by their passion for discovering new songs and sharing them with others. D.J.s were expected to have their own taste and unique style. Whatever genre they played, they were expected to convey their distinct personality through music.

Unfortunately, most club d.j.s in Hong Kong are exactly the opposite. They stick to the same songs and don’t exhibit any personal taste. Just reflecting the crowds choices they are essentially a juke-box, rather than a d.j.

Because of this lack of individuality, there’s not much that separates one d.j. from another, or more importantly, one club from another. That’s right, Hong Kong’s so called exclusive clubs aren’t any different musically from any lowly establishment.

Music, one of the most important differentiating factors between clubs, is currently being overlooked.

Why go to someplace supposedly more sophisticated if you’re just going to get the same old thing? It stands to reason that a high-end club should feature music of a higher caliber for discerning tastes, and not be pandering to the lowest common denominator. Unfortunately, that’s not the case.

Though exclusive clubs do occasionally bring top name d.j.s, they fail miserably at playing interesting music 75% of the time. (By interesting I mean not playing strictly top 40.) It’s pathetic that the playlist of an average ten-year old in suburban America is the same as Hong Kong’s more exclusive clubs.

It’s true that Hong Kong’s high property prices make it difficult for anything beyond mass-market to thrive. However, d.j.s need to begin thinking of d.j.ing less as an hourly job, and more as something they can put their personality into. For their part, club owners can capitalize on their status and stimulate changes with a little more courage and vision. Crowds will fall in line.

(This situation isn’t just blighting Hong Kong’s clubs, but occurring in major nightlife and music capitals around the world. It’s strange that we now find ourselves dominated by a homogenized music culture despite the widespread popularity of the Internet, which in theory should open up a whole new realm of choice.)

The artwork at top is by Matthew Rodriguez. You can read more about it here.