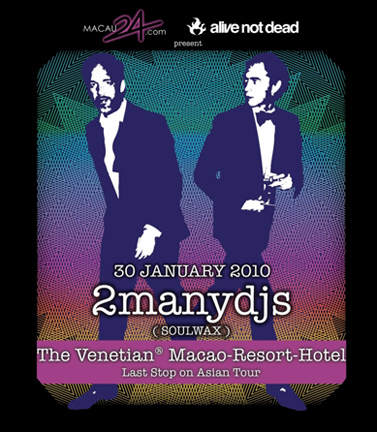 Those not following dance music too heavily may be unfamiliar with the name 2 Many DJs. The group, consisting of two brothers from Belgium, were pioneers of unorthodox ‘mashups’ before the style even had a proper name (and far before such musical blends became common).

Always ahead of the mainstream, it appears that the duo have come up with a new innovation and are now taking their show on the road.

2 Many Djs promise a live performance that integrates audio and video in an exciting new way. As masters of blending different genres of music, the pair has taken their creativity in a slightly different direction. It appears that they have created custom videos for the songs in their sets.

Like their smart manipulation of music, the videos have been built to compliment the songs and cause a dance floor frenzy.

Check YouTube for some examples of 2manydjs live shows!

Another d.j. doing interesting things with video is Mike Relm who appeared in Hong Kong in 2008.

2 Many DJs at the Venetian, Macau

The show takes place at the Bellini Lounge in the Venetian Macau on Saturday, January 30th. The event is co-presented by the popular social network Alive Not Dead, so you can expect a good crowd. In addition to 2 Many DJs, the party includes five other d.j.s! Doors open at 10 pm and the event goes until 6 am!

With the change of venue to Cafe Deco, more tickets are now available!