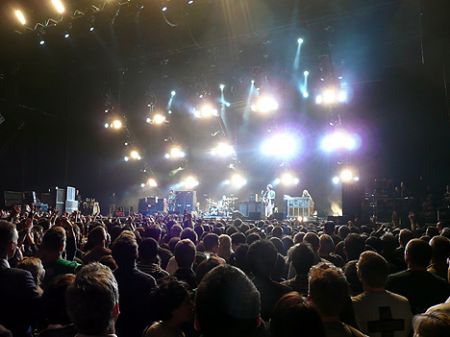 Last week I attended the Oasis concert at Asia World Expo. For those who have never visited, it’s just past the airport. Asia World Expo is one of the few venues in Hong Kong that can support a big live show. The place seems to be the only international-level concert hall in use recently.

Check out photos from the night and learn about one potential snag that could spoil your fun!

With thousands of people arriving and leaving at the same time, there are a few bottlenecks.

The biggest problem I witnessed was checking bags. Before entering the concert hall, anyone with a large bag, or a “professional” camera, was told to check it. This resulted in a huge line both to check and later to claim belongings.

Though there are temporary lockers available, in addition to a staffed counter to store bags, due to the shear volume of people, it was overwhelmed. The lockers, a good plan b, were completely occupied before the show started.

At the end of the night, as fans streamed out to retrieve their things, they were greeted with a slow moving line that snaked for over two blocks! It must have taken at least an hour to claim their belongings – not a cool way to end a fun night!

To avoid a hassle at the next big event, leave your bags at home, or check with the management to see what type of rules will be enforced at the hall.

The Oasis concert in photos!