If you haven’t visited Kowloon’s Indie music haven yet, now’s your chance!

Open since 2009, Hidden Agenda boasts an ambitious schedule throughout the year, hosting everyone from up-and-coming local artists, to major names in underground music from around the world.

The large space is housed on the second floor of an industrial building in Ngau Tau Kok and has a grittiness that you typically find in legendary Rock-n-Roll clubs.

For those who have never visited, it’s a short walk from the Ngau Tau Kok MTR station.

The music for this weekend is divided into three sessions – one held on Friday, and two on Saturday.

The exact order of the bands is not being released, in part so that when guests arrive, they can discover something new.

Friday night’s session starts at 7:30 and goes until 2am. The lineup includes:

Saturday has an afternoon session and a night session. The afternoon session runs from 3pm to 8pm, and features: Sensi Lion, Parallel Horizons, The Priceless Boat, éŠè•© Loiter, Yukilovey, Feel Of All, and The Time Traveler.

For more information about the different bands participating and samples of their music, have a look at the band show event page.

Use it or lose it!

Hong Kong’s high rents are perhaps the biggest obstacle to the growth of the city’s Indie culture and band scene. Few venues are willing to take a chance on new bands or music that doesn’t cater to mainstream tastes.

Hidden Agenda is that rare space that has tried to make things work, curating a diverse program filled with alternative or niche sounds.

2014 was a tough year for Hong Kong’s Indie music scene. Though many interesting bands and DJs visited the city, the turnout at gigs was often disappointing.

Groups that had played the night before in Korea or Japan to thousands of people, were greeted in Hong Kong by mostly empty rooms.

Not long ago, H.K. was somewhat of a cultural backwater, with few interesting bands and DJs coming through town. The only reason things changed is that a handful of dedicated people worked hard to make concerts and shows happen. If support for Indie music continues to decline, the venues and promoters who have put their passion into booking talent will stop, and we’ll descend back into the Dark Ages once again.

What can Hong Kong’s indie scene do to grow?

One major problem with H.K.’s Indie scene is the tendency to just reach the same small group of people over and over again, and not actively search out new ways of gaining followers. There needs to be better promotion and new ways of getting the message across if indie culture is going to survive and thrive in Hong Kong.

Just because you’re an Indie local band doesn’t mean you should automatically receive support. You need to earn it!

For example, appropriate song selection continues to be a major issue with local bands. On a Friday or Saturday night, crowds don’t want to hear your ballad songs. Play something rockin’ so that people who aren’t familiar with your music will stand up and take notice!

Your goal should be to get people who don’t know your music excited about your show. Playing the wrong type of music is self-indulgent and amateurish. There’s a time and place for slow songs, but not during peak times when people want to go crazy.

Hong Kong’s local bands don’t need affirmative action. Magazines that inflate mediocre talent in the local scene are actually doing the bands a disservice. Local indie bands will never get better if they are held to low standards. H.K. bands need to be able to play or perform on an international level and not just be “good for Hong Kong”.

Tickets for the two-day festival are available at the door and go for $120 HKD for both days, or $80 HKD for a single night. That’s about the price of one drink in Central! 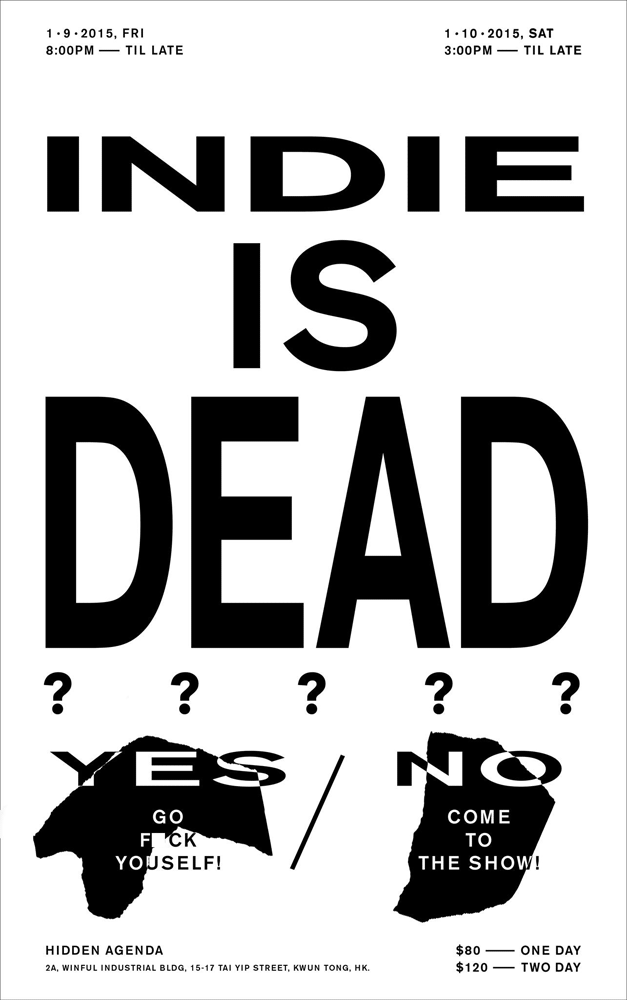