The wild, champagne soaked Cubic anniversary party typically features a major name in music, a trip to an early morning dim sum restaurant, and a terrible hangover. (Luckily, we avoided the hangover this year! 😉 )

The headline entertainment for the 4th anniversary was rapper 2 Chainz, a music industry veteran who reinvented himself a few years ago and has gained a high profile by constant collaborations with a who’s who of notable M.C.s.

Taking the stage at a little after 2am, the rapper ran through a set combining a short medley of his work along with a handful of his numerous collaborations. The audience, who packed the front of the stage, rapped along and chanted the chorus to several of his more well-known cuts. 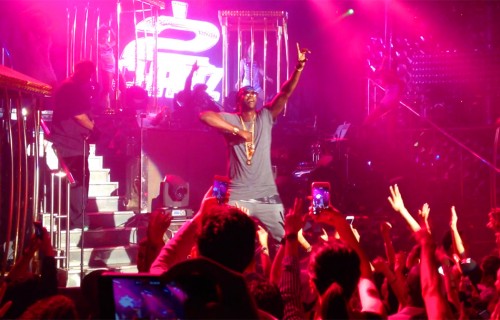 The type of music 2 Chainz makes is more head-nodding than dance-on-top-of-a-table type of songs. When there was a quick interlude, the rapper had his DJ play Lil Jon’s “Turn Down For What,” and you could see that the audience actually reacted to (and were craving) more of that sort of high-intensity song.

Check out our exclusive video for highlights!

2 Chainz made an effort to a reach wider audience, and one of his beats on Saturday sought to tap the energy of the EDM trend with an instrumental that combined many of the elements of that genre.

However, despite a good effort, his catalog of songs just didn’t reach the same type of fever pitch that Club Cubic has grown accustomed to. Macau’s best club is somewhat spoiled, having hosted many of the biggest names in dance music including world famous party-rockers such as Major Lazer, Steve Aoki, Flo Rida, Lil’ Jon, Ludacris, LMFAO and PSY.

After 2 Chainz completed his solid set, the DJs kept things rocking and partygoers stayed on until 6am.

Congrats to John, Paco, Karen, Shirley, Monica, Henry and the rest of the Cubic crew! Looking forward to the next mega-party, The Road to Ultra, which will take place at Cubic on June 13th. The confirmed line-up so far includes 2manydjs, Nicky Romero, DVBBS and Porter Robinson.

Stay tuned for more info on how to get reduced price tickets!