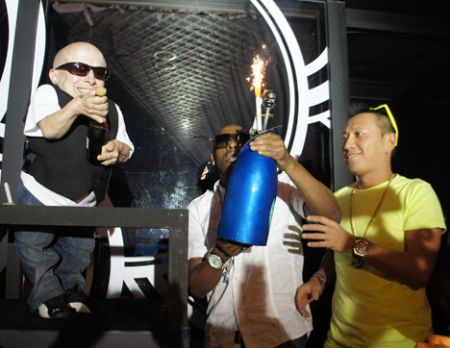 Top Hong Kong club Dragon-i celebrated their 8th anniversary on Saturday, November 27th. The club has been a hot spot since their opening night, hosting scores of international celebrities and well known performers over the years.

Saturday’s birthday festivities included a traditional lion dance as well as an appearance by Mini-Me (aka Verne Troyer of the Austin Powers films,) and a performance by Coolio.

The packed crowd, dressed in 60’s and 70’s outfits, seemed particularly fond of Mini-Me, who was charismatic, waving to his fans and shaking hands with revelers.

At the start of the night, Dragon-i owner Gilbert Yeung joined Mini-Me and Coolio in the traditional champagne anointment. (Yes, Mini-Me had his own mini bottle!)

As we’ve mentioned before, Dragon-i has played an important role in internationalizing Hong Kong’s nightlife scene. While other night spots have been around longer, ‘D.I.’ (as the club is known,) significantly raised the bar in terms of interior design and music.

Dragon-i has brought top d.j.s, producers and singers to the city, helping to establish Hong Kong on the international circuit. Dance music legends, as well as the latest sensations have passed through their doors. The club’s commitment to music has been shaped by founder and occasional d.j., Gilbert Yeung.

Dragon-i also established nightlife practices that have been emulated by other venues around town, including their system of providing free drinks and meals to models.

Eight years is a major milestone in a city that always embraces the newest thing. Dragon-i has survived SARS and other difficult times to remain relevant. Happy 8th anniversary, and congratulations to Gilbert and the original Dragon-i gang, Gordon and Jackson!