The venue for the night was the new Kai Tak Cruise Terminal, which is proving to be a popular location for large-scale events. Although hard to get to, it provides organizers with a number of massive rooms to choose from, and a widely reconfigurable space.

The ground floor location utilized by CK for the night avoided the pitfalls of the recent White Party which took place at the cruise terminal a few weeks earlier. That mega event, which reportedly drew 3000 people, received heavy criticism after many partygoers waited for over an hour just to get in.

Guests for the Calvin Klein event luckily, didn’t have the same problem. Entering the event went smoothly, and once attendees proceeded through the check point, they passed a wall covered in Justin Bieber Calvin Klein photos, followed by a vast open room. 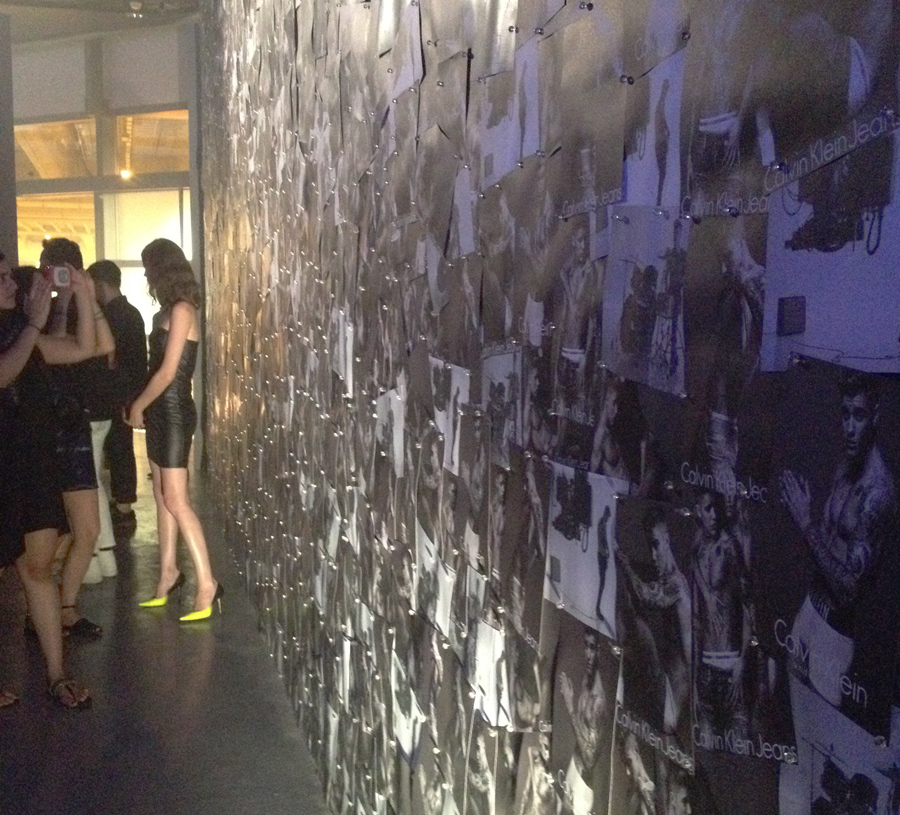 As far as the scale was concerned, the space was on par with the type of venues found in Beijing and Shanghai. Hong Kong has few large, open spaces, and the cruise terminal must be a welcome addition for brands looking to create an immersive environment from scratch.

The large rectangular room was set up with VIP tables on either side, a stage in front, and a series of huge doorways at the back that spilled out onto a massive outdoor patio. 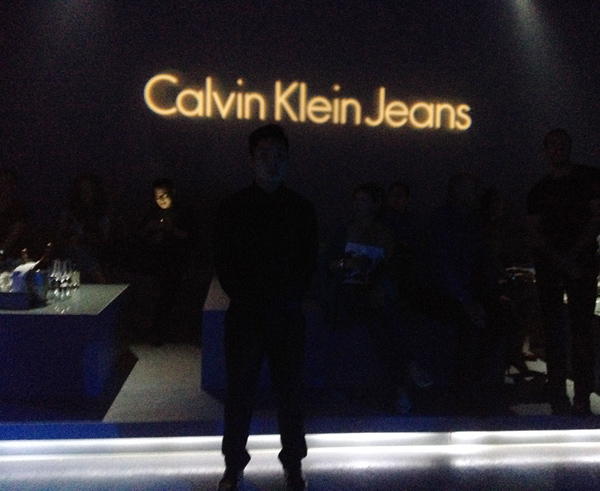 The view from the patio offered an incredible Hong Kong panorama, as the terminal is built directly on the harbor-front. (Watch our exclusive video for a look at the view.)

Guests frequently dipped in and out throughout the night to grab a drink, smoke, or soak up the atmosphere. The outdoor bar was outrageously long, and filled with hundreds of champagne glasses.

As partygoers arrived via chartered bus, or taxi, the space began to fill up. With Hong Kong’s merciless humidity, it didn’t take long before the room began to get hot. As we have experienced at a number of other recent parties, there’s not much organizers can do to keep large-sized venues cool with a big attendance.

A Major Night of Music!

Our friend Kevin Poon from CLOT, who has increasingly become a man in the spotlight for his numerous ventures in the city, (everything from fashion distribution to ice cream sandwiches!) started off the music sets of the night. Although not technically a DJ, he played a variety of of-the-moment Hip Hop tunes. Kevin was followed by Korean-American sensation Jay Park. 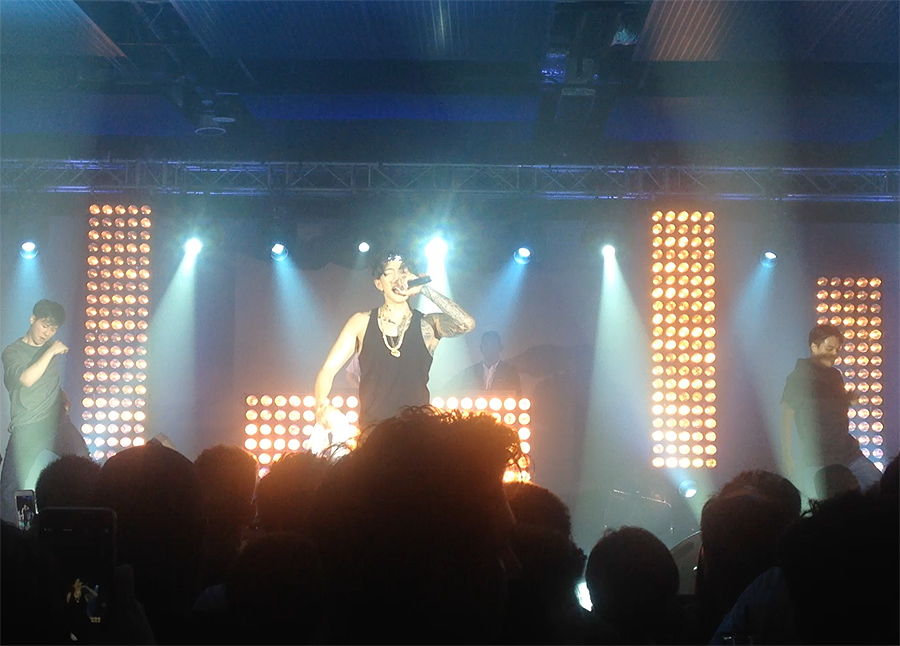 Jay performed a mixture of original material and Korean adaptations of popular American songs. It was a fun, party-rocking set, but the audience seemed more wowed by his shirtless physique and his celebrity status, rather than his music. Girls went wild trying to take photos with the singer as he walked through the audience at the end of his set.

Before Bieber came on, at around 11pm, security guards were instructed to hold up blinds so that no one could see him as he walked onto the stage. We were sort of between the speakers, and caught the star walking out in our video.

Playing for nearly an hour he ran through a variety of his material, from uptempo party songs to a low key acoustic set. It was the simple unplugged format where Bieber truly shined. Singing with just a guitar to accompany him, he had a solid voice, good presence, and delivered a well-rounded performance. By comparison, his more slick Pop songs with heavily choreographed dance movements, came across as forced and unnatural. 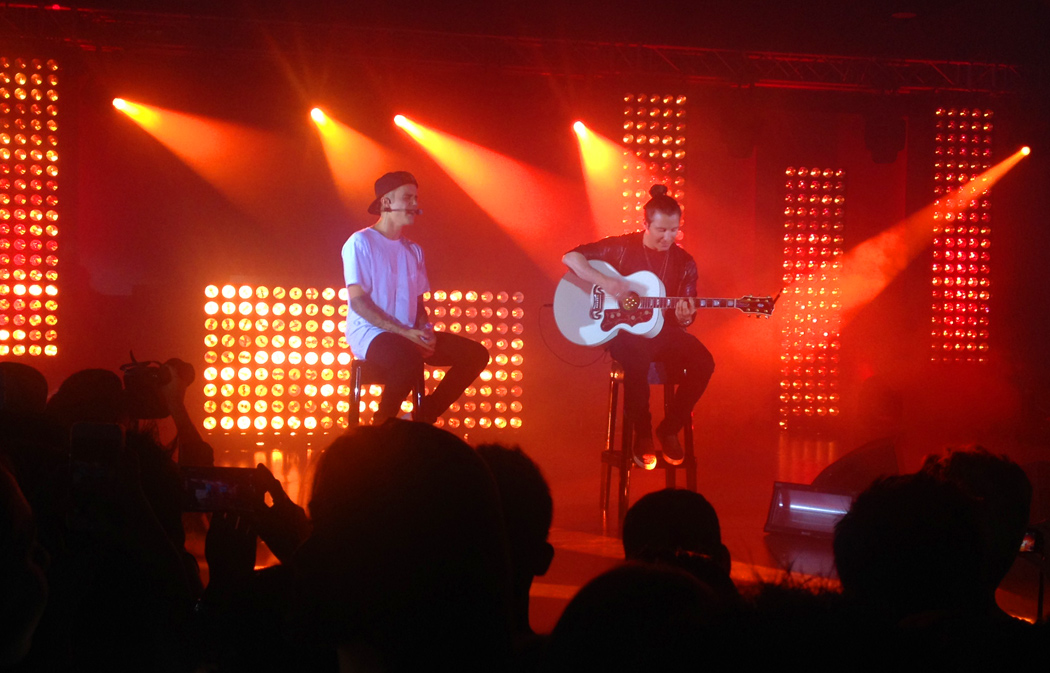 Rather than relying on needless over-production, his fundamental singing skills were his true strength.

The number of phones in the air recording the set was mind-boggling and it was sad to see people prioritizing their photos over fully engaging with the music. 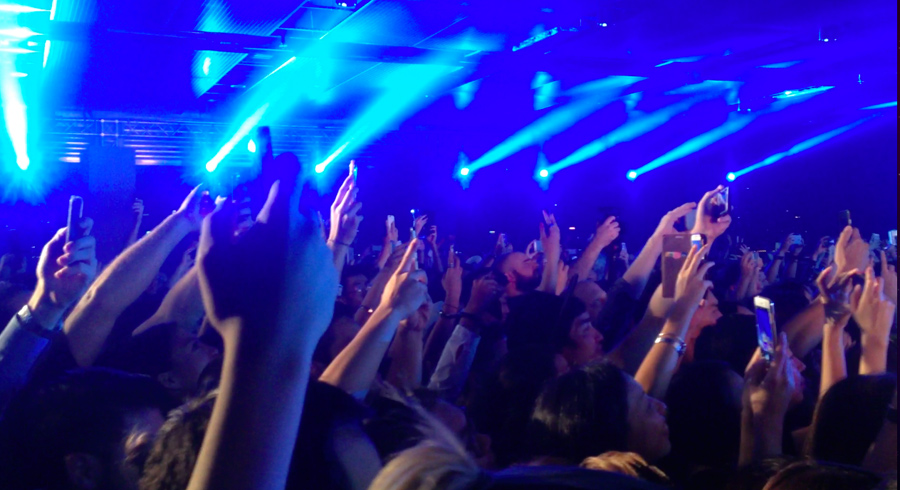 Instead of enjoying the concert, many people were collecting a celebrity centered “experience” to share on their social media. You could see this by all the people taking selfies with Bieber in the background (like the woman in the foreground of the photo below.) 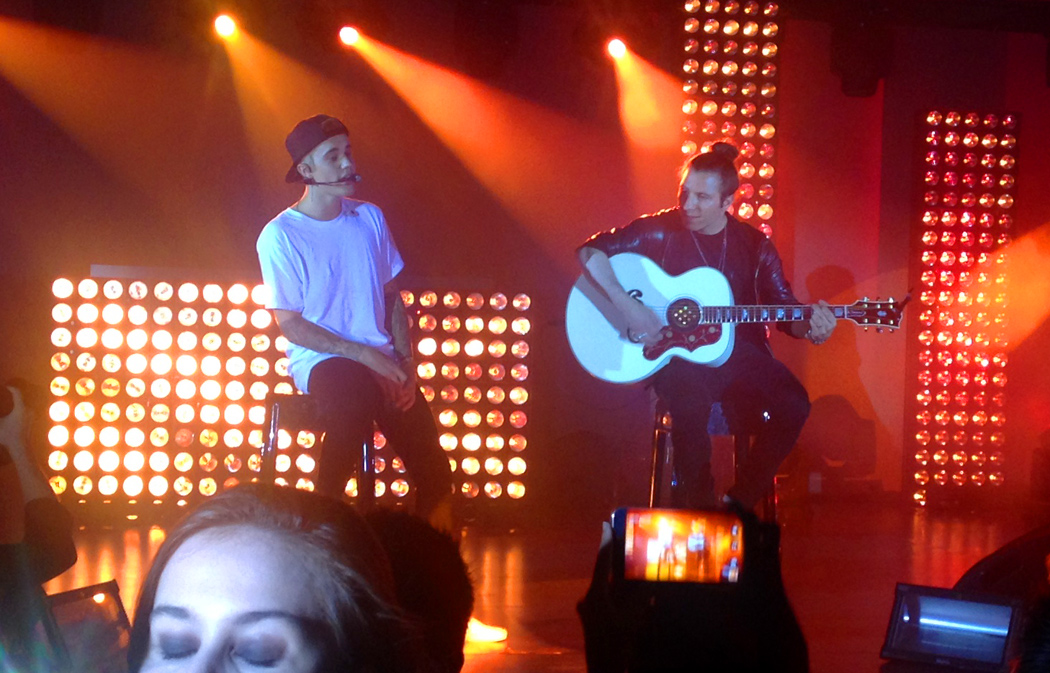 After nearly an hour, Bieber had a false ending and then came back out for an encore. Of course at the end of the night he played his biggest hit as the crowd sang along (yet still with one hand on their phones.)