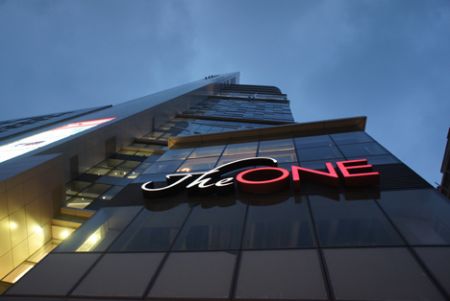 Situated at 100 Nathan Road in Tsim Sha Tsui, The One is twenty-five floors of shopping, restaurants and snacks. But one thing that makes the new mall notable is the prominence of Japanese brands. Several of the shops are the first of their kind outside of Japan. What gives?

Japan’s tough economic climate, with stagnant growth for retail sales, has forced the normally insular clothing companies to look beyond their home market. Hong Kong, with its favorable view of Japanese brands, and a steady influx of Mainland tourists, offers a good opportunity for expansion.

The I.T group, a prominent Hong Kong retailer with strong existing ties to Japanese brands, has taken their formula to The One’s vertical setting.

Previously, i.t has built a presence for labels including Comme des GarÃ§ons, Visvim, Neighborhood, Junya Watanabe, SOPH and many others around the city.

Inside The One, i.t has assembled an impressive bouquet of Japanese labels positioned in prime locations. Browsing the shopping center, many of the stores bare the i.t logo on their front windows, emphasizing their local partner.

To further entice Hong Kong shoppers, there are boutiques that are exclusive to The One.

A big standout is the United Arrows, Beauty & Youth store, which I believe is the first outside of Japan.

[photopress:united_arrows_hong_kong_store_shop.jpg,full,pp_image] (note the prominent i.t logos on the windows in blue.)

The brand stocks a selection of finely crafted contemporary renewals on old American classics. The appearance is comfortable, relaxed and stylish, all at once. The shop has clothing for both men and women.

What else will attract shoppers to The One?

The One isn’t a one-trick pony. In addition to a plethora of trendy Japanese brands, there are several other draws.

The shopping center boasts a new six-cinema multiplex that’s part of the Broadway chain. The theaters are spread out over the sixth, eighth, and tenth floors.

Home furnishings are another strong point of The One. The eighth floor is mostly taken up by an immersive home furnishings section that seamlessly combines two shops, Homeless and Lost & Found.

Filled with accessories and knicknacks, the space allows mall shoppers to explore in an all-encompassing environment, rather than browse separate shops. It’s a warmer space that makes you feel like you’re in a boutique and not a high-rise shopping mall.

Also in the home furnishings category, famous American mattress brands Sealy and Simmons both have shops in the mall. (What next? 1-800-M-A-T-T-R-E-S?)

The higher floors are occupied by restaurants with incredible views of Hong Kong Island. In some cases, they even have wrap-around outdoor balconies offering a view all the way to West Kowloon.

Apparently there’s a ‘Sky Garden’ on the 16th floor, which I didn’t explore, but was probably built to satisfy their public space requirement. (If you build over a certain number of stories, you need to allocate a certain amount of space for the public.)

At the time of my visit, The One was only 80% occupied, but it’s already worth a look! For more information on shops and restaurants, check out their website.

The One
100 Nathan Road (at the intersection with Granville Road)
Tsim Sha Tsui, Kowloon