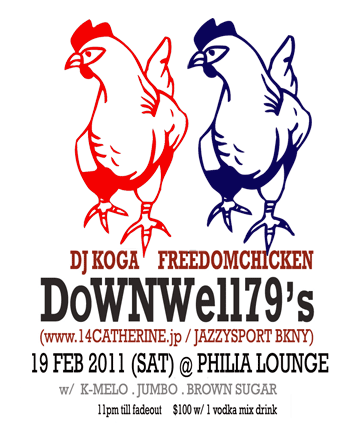 Japanese d.j. / producers, Koga and Freedom Chicken will be taking over the decks at Philia Lounge on Saturday night. The two play a wide range of musical genres covering Soul, House, Techno, and Hip Hop, to name just a few.

DJ Koga spent nine years in New York, eventually establishing himself under the Jazzy Sport Brooklyn moniker, and playing at venues such as APT. Together with Freedom Chicken, the two have a long list of remixes and mixtapes that have garnered them a significant rep in Japan.

Expect a fine cross-section of underground dance music with an open-minded crowd.