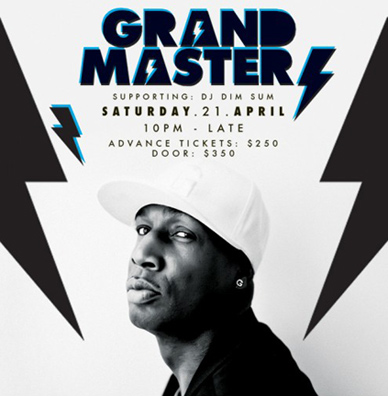 It’s safe to say that Hip Hop music wouldn’t exist as it does today without Grandmaster Flash. His legendary parties, his mixing prowess, his innovations in mixer design, and of course, his group, Grandmaster Flash & the Furious Five, were instrumental in shaping Hip Hop’s formative years.

Grandmaster Flash and the Furious Five were a super group of their time, featuring the best DJ, the top rappers, the most slick live performance, and the coolest outfits. By the time they moved from playgrounds to making records, they were already seasoned performers. Yet Hip Hop music in those days was shunned by the industry, and couldn’t even be played on the radio in his home town of New York.

From its humble beginnings, few people could have guessed that Hip Hop would continue to have such an enormous impact on music, fashion, and style around the world even today.

Catching Grandmaster Flash on Saturday night at Hyde is your chance to bear witness to that lineage and support an originator, who without, there would be no Jay Z, Kanye West, or Lil Wayne.

Hyde has been stepping up their game over the last few months, bringing more big-name DJs to perform. Next Saturday, April 28th, they will be hosting DJ Qbert, the masterful West Coast turntablist.