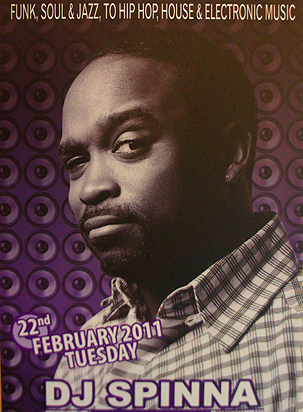 Legendary music man D.J. Spinna, christens the new sound system at Dragon-i on Tuesday night. The talented New York-based producer is respected equally in both Hip Hop and House circles as a top remixer and beatmaker.

Spinna’s known for his soulful sounds and has been sought out to remix everyone from De La Soul to Michael Jackson. A d.j.’s d.j., luminaries such as Kenny Dope and DJ Scratch spun at his birthday party last month in New York.

While Spinna lends his magic touch to numerous genres, few producers can equal the same level of talent in even one category. For a taste of some of D.J. Spinna’s music, check out the selections below:

For a personal tour around the producer’s studio, watch this video:

Dragon-i has just invested in a brand new, top of the line sound and lighting system. For the job they sought out international talent.

For years the club has brought the world’s top d.j.s to Hong Kong. Now they can boast a sound system on a similar level.

For a look at the many past events at Dragon-i, go here!