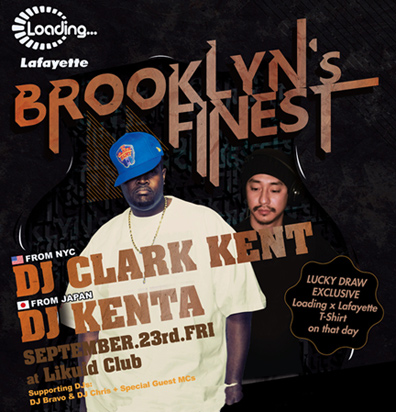 H.K.’s Loading store has built a reputation as the place to get independent brands and one-of-a-kind T shirts that you won’t find anywhere else in the city. These guys are plugged into the underground scene, and they don’t just sell Hip Hop fashion, they live it. Over the years they have held several interesting events, including live painting sessions and Hip Hop showcases.

Likewise, Japan’s Lafayette is both a street wear shop and a brand heavily influenced by New York culture. The two are joining forces to bring the legendary DJ Clark Kent to perform.

Clark Kent is a veteran d.j. and has been a player in the New York Hip Hop scene for nearly three decades! DJ Kenta is an up and coming talent, and a fan of the original soulful side of Hip Hop.

Check out the promo video for the night:

Expect great music, a cool crowd, and a rocking party!