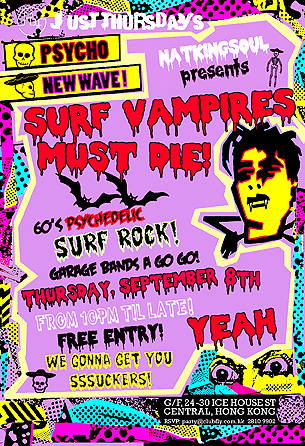 The haunted house party is back! Surf Vampires Must Die features the dirtiest Surf Rock tunes from the 1960’s garage band scene, plus a few modern tracks thrown in. The music direction is equal parts psychedelic and psychotic. Just how grungey is it? Listening to the songs, it sounds as if the bands didn’t take a shower for a week and were potentially on magic mushrooms during the recording sessions.

Surf Vampires Must Die walks a fine line between explosive energy and just plain weirdness. To be sure, you won’t hear anything like it anywhere else. If you want to listen the same old thing, you’d better stay home.