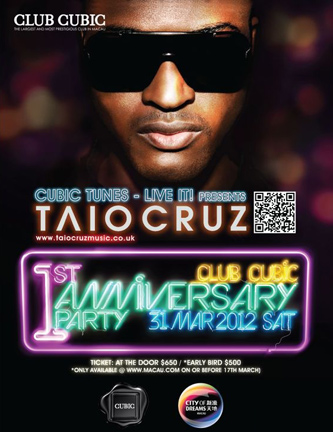 To celebrate their one-year anniversary, Cubic, Macau’s super-club, is hosting yet another major R&B star on Saturday, March 31st. This time it’s Pop singer Taio Cruz who’s had a string of Top 40 hits including “Dynamite,” and “Break Your Heart.”

If you’ve never been to Cubic, you’re missing one of the best venues to catch international Hip Hop and R&B acts in the region. The massive space contains a large stage that allows guests to get close to the action. But even more exciting, performers at Cubic frequently venture out into the crowd during their sets.

The club is massive compared to Hong Kong’s small venues, with two rooms and several huge bars. The atmosphere at Cubic is fun, with partygoers really letting loose.

Cubic’s two-day opening weekend featured two of the best performances in recent memory, with energetic shows by Flo Rida and Lil’ Jon. Check out photos from the opening night here.

Below are a pair of Taio Cruz’s Pop hits:

Expect a large turnout and a major party!