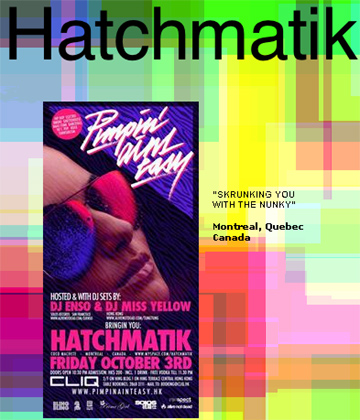 There are a number of mp3 blogs that are influential and allow new talents, (often bedroom producers or small city d.j.s,) to rise from obscurity and get catapulted onto the international circuit. This is usually accomplished by a string of unlicensed remixes of popular or underground songs. Well Hatchmatik isn’t one of those guys! Actually, he’s sort of one of those guys, though he’s already made a name for himself as part of the top club crew in Montreal.

The gang behind the monthly Pimpin’ Ain’t Easy night at Club Cliq seem to be tapping this network and bringing Hong Kong some of the new talents before they break through to larger recognition. Catch these guys while you have a chance! They’re still hungry and excited about playing in new cities around the world.

Hatchmatik is a good fit for Pimp’ Ain’t Easy. He plays the same style of modern club music that they have been pushing. Expect Electro, Baltimore and Baile Funk music among others. Also listen for Hatchmatik’s own remixes of top club songs. Backed by DJ Enso and DJ Miss Yellow, this should be a fun night! (If you get to Cliq early, they have free vodka shots between 10:30 and 11:30!)

For more information about Hatchmatik, check out his website here.