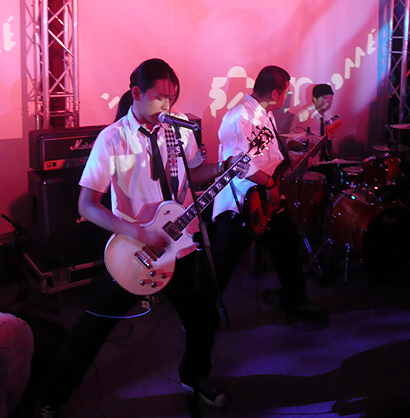 If there’s one band in Hong Kong that knows how to get people jumping, it’s Hardpack. These guys play a kind of party-Punk somewhere between Bad Brains and Fishbone! I’m talking lots and lots of energy. Unlike other bands, their songs are immediately catchy and they are masters of their instruments. You won’t hear anything from them that isn’t tight. I’ve seen Hardpack perform over half a dozen times and they are pros at increasing the mood and then some!

The CD launch party is being held at Cliq on Wednesday the 19th and features an interesting formula. Guests pay $75 HKD for the new CD and are treated to a mini-concert by Hardpack that also includes special performances by Josie Ho, Joey Tang and Attention to Piss.

Several months ago, a similar formula was used for the CD launch of local band Audio Traffic. That night featured a huge turnout of music fans in addition to top entertainment figures. The event was a massive success and I’m expecting the Hardpack launch to be equally as big.

For a sample of Hardpack’s music, check out the second song on their MySpace page titled “I don’t think so.” (Listen how it changes up at around two minutes into the song… this is when people start jumping through the roof!) The Hardpack CD launch party is a highly recommended event!

– O.K. I’ve covered the Alive Not Dead gang several times before. As someone who follows online trends closely and attempts to understand the power of the Internet, I have an appreciation of people who put network dynamics to good use. So, without further ado:

Alive Not Dead taps the power of their social network… again!
Hong Kong based social network Alive Not Dead deserves credit for helping to bring talented local bands like Hardpack and Audio Traffic to wider audiences. Band scenes in Hong Kong tend to be splintered and somewhat incestuous. Hong Kong also has very few venues for live music. The truth is, a majority of people who love music in this town wouldn’t have any exposure to Hardpack, no matter how good their music is.

Enter Alive Not Dead. With the social networking site, the band has been able to reach a much wider audience and form a genuine, grass roots connection with music fans. This is something that no artist management firm or record label can offer.

In a sense, being a part of Alive Not Dead is cutting out the middle man. Traditionally, artists would sign up with a record label who would groom them and control their marketing and promotion. For this, the label would take a hefty fee and what they would offer in return is a chance to get the group’s music played on the radio, or on music video channels like MTV. Record labels in essence, held the only keys to introduce a band to a wide-scale listener base.

But in this day and age, the radio and MTV aren’t the only channels of exposure to new music. Sites like YouTube and MySpace are now gaining in importance, especially for non-Pop music.

Social networking sites such as Alive Not Dead offer a built-in user base, which makes them inherently powerful. They can deliver exposure to a large audience, without the whole process of needing to go through a label to open the doors to a listener base. This fact is a game changer and a major revolution!

Alive Not Dead are already tapping the power of their social network to help promote talented members of their site. They frequently highlight artists, giving them the opportunity to be exposed to everyone on the network. This system can be used to help promote all manner of talent, from painters (such as comic artist Pat Lee,) to actors who are in upcoming films; to bands coming out with new music.

The system totally works! The casual member of the site who may have never been to a band show, or even known what Punk is, can discover Hardpack’s music.

This represents an important new opportunity. The older system favored the status quo. Because Hong Kong singers made money primarily through product endorsements, rather than music, if you didn’t have the looks or the musical style in line with preexisting consumer tastes, then record labels wouldn’t take a chance on you. Bands like Hardpack fall into this category.

Alive Not Dead’s social network offers an efficient platform for artists to gain direct, wide-scale exposure without going through traditional channels or having to pander to mainstream tastes. This is a major upheaval.