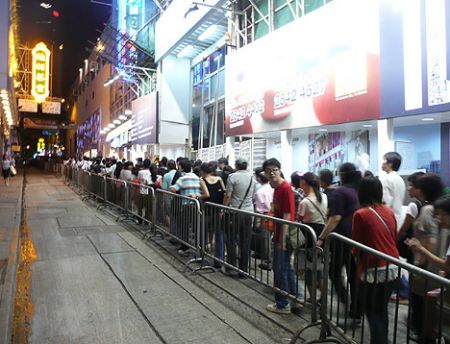 Halloween in Hong Kong has been growing exponentially every year and 2008 was no exception! This year it fell conveniently on a Friday. Throwing aside recent gloominess about the economy, throngs of people donned costumes and came out to celebrate.

Why has Halloween, a totally foreign holiday been adopted by Hong Kong? I’ve offered my theory on that before. I don’t think people actually care exactly what the holiday is or where it comes from. Just stop and think about it in more basic terms – how many times a year do you get to wear a costume and walk around in public? As in the U.S., it’s just an excuse to get dressed up and have fun with friends.

Recently Halloween has become a victim of its own success. Particularly Lan Kwai Fong, the epicenter of Hong Kong’s Halloween celebration, has become hard to get to. Due to the big turnout, the police have been cordoning off the area’s streets and making revelers snake through several blocks in order to reach the main nightlife intersection. Currently it’s not convenient to walk through the slow moving crowd and it’s a kind of a downer to have to spend an hour waiting on lines just to get into the famous party zone.

A thought came to me to make things smoother.

One thing I noticed as I was surveying the crowd is that a large percentage of the people on line weren’t in costume. Many of them are onlookers who are simply walking though Lan Kwai Fong to check out the scene and take photos of the celebrants.

I have an idea (perhaps unenforceable,) that may make for a speedier arrival and a more festive atmosphere.

Why not create two separate entrance points – one for costumed party-goers and another for onlookers?

This would allow fast entry to those in costume, which would encourage participation. A system like this would create a cooler overall experience, since the majority of people would be partaking, rather than just gawking. Ultimately it should make the night more fun for everyone – including the police!