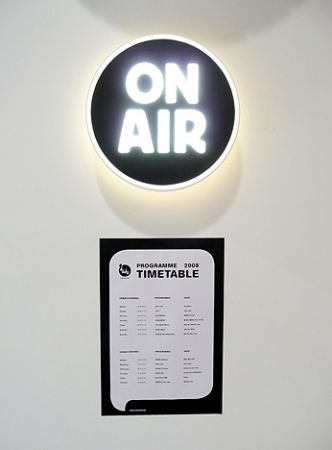 I ran into my friend M.C. Yan on Thursday night and he was excited to tell me about a new project he’s been working on called Radio Dada. Yan is one of the pioneers of Hip Hop in Hong Kong. He’s helped popularize the concepts behind the culture and is well known as a graffiti artist and rapper. Yan was also a member of the now defunct group, L.M.F.

Friday night I bumped into him again, and since we were right next door, he gave me a tour of the new station he’s just launched.

Hidden deep in the basement of Mongkok’s Langham Place shopping center is a small white shack.

This is the location of Radio Dada’s studio. It is here where d.j.s and special guests come to broadcast their message or music. Radio Dada is an open format, non-commercial Internet radio station. It seems modeled on community run stations like WBAI in New York. They offer numerous programs on a variety of niche subjects. Radio Dada also has special mix shows that normally wouldn’t have a home in Hong Kong’s dysfunctional radio spectrum.

[photopress:MC_Yan_Hong_Kong_Hip.jpg,full,pp_image] Could that be the new Dusty X NSBQ polo shirt he’s wearing?

Yan is serving as the music director of the station. He told me about a few of the programs and they included everything from underground music to talk shows about U.F.O.s! Sounds cool to me!

You can learn more about Radio Dada, or simply tune in to give the station a listen by visiting Radiodada.HK (Update: now defunct).