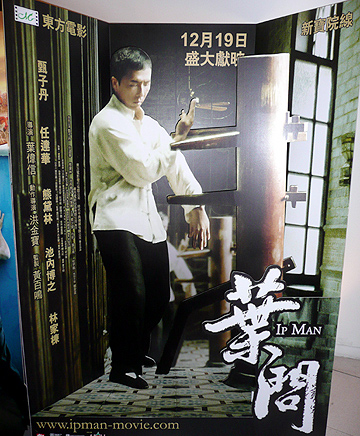 How many kicks and punches did I witness in the last week? Probably more than most people see in a lifetime! Donnie Yen’s Ip Man, and Tony Jaa’s Ong Bak 2 share certain qualities, but weak action isn’t one of them!

O.K., I’m not going to really have the two films battle each other because it would be like comparing apples to oranges. (Ip Man is a Hong Kong film, and Ong Bak 2 is from Thailand.) Here are a few quick similarities: the movies are built around martial arts action; the films star actors with real-life martial arts skills; both are looking beyond their home turf for box office success; and the two are interested in hatching sequels.

Ip Man is about a real-life martial arts master born into a wealthy family. As he spends his time practicing Wing Chun kung fu and lounging with his wife and son, the martial arts schools of Foshan compete with one another for students. When their routine is shattered, Ip Man is called upon to act. Later, during Japanese occupation, Ip Man must weigh the safety of his family over self-preservation, honor, vengeance and national pride.

Though based on a real person, the film fictionalizes most of Ip Man’s life, which makes for an exciting movie, but not something close to the truth. In this sense, Ip Man is becoming a hero-protagonist, similar to how the real-life martial artist, Wong Fei Hung was also added as a film staple. (There are over 100 Hong Kong films that were created using Wong Fei Hung as a central character.)

Though the marketing of the film never says “based on a true story,” it does show actual photos of the real Ip Man, and creates a bridge to modern times by talking about the kung fu master as a mentor to Bruce Lee.

Something about this format didn’t feel quite right with me. Because it takes place so close to modern times, and deals with historical and nationalistic issues, it came across as revisionist to an extent.

In order to guarantee the film a wide release, certain elements may have been added to placate different markets. If possible, they should have created different versions for territories beyond Hong Kong, which would have made the film potentially less melodramatic.

Though I enjoyed Ip Man and found it entertaining throughout, the final scene bothered me. As usual, it was just the last few minutes that I found myself thinking “that wouldn’t happen!” The movie’s acting, storytelling and plot give the film merits well beyond action. With a broad appeal, the box office has been strong, and a sequel is now in the works.

One of the treats of living in Hong Kong is the greater access to films from other Asian countries. Hong Kong is a secondary market for Japanese, Korean, Thai, Taiwanese and Mainland films.

The types of movies that can make the jump successfully are often genres that have cross-cultural appeal, such as action, horror, and slapstick comedies. These make use of non-lingual, visual imagery to reach audiences.

Ong Bak 2 takes place during a time of treachery among Thailand’s top generals. A young boy escaping from a would-be assassin lands in the lap of a gang of notorious robbers. The bandits take him in and train him to be a ferocious fighter.

In Ong Bak 2, the modern popularity of mixed martial arts is nothing new. Growing up in a bandit lair a few hundred years ago, the main character gets his own schooling in kung fu, samurai swordplay, wrestling and boxing from different experts. The rest of the story line deals with Tony Jaa’s vengeance against his parent’s killers.

The way the action is filmed in Ong Bak 2 is very different from Ip Man. Tony Jaa’s fight scenes are fast-paced runaway trains of action. The fights go on for much longer and encompass a whole legion of props and weapons.

Whereas Ip Man is a graceful martial artist, Tony Jaa’s character is involved in such ferocious fast-paced fight scenes, that there’s not much time to digest in between attacks. The plot of Ong Bak 2 is simplistic and the action so overwhelming that there’s no chance to question any of the scenarios.

The action choreography and fight scenes between the two films are very different. Ip Man’s shots are more cinematic and sophisticated in conveying power and agility. (The scenes involving a group of interlopers from the North are handled particularly well.) While Ong Bak 2 has similar scenes establishing prowess, the majority are filled with rapid shots of people getting seriously hurt!

Tony Jaa is a smart fight choreographer and he has mined decades worth of films for fight ideas. In Ong Bak 2 he even uses a drunken master routine that originated in Hong Kong movies.

The thing about watching a Tony Jaa movie is, when you see someone getting hit, you know they were actually getting smacked! There is no Hollywood chicanery, it’s the real deal. At the very least, during filming I’m sure a few people broke ribs and lost teeth. (And people wonder why Tony Jaa disappeared from the set!)

If you’re bloodthirsty, and the sound of breaking limbs is music to your ears, check out Ong Bak 2!