Adidas and New York entrepreneur Damon Dash are putting on a series of art and music events in Hong Kong in early March. The series, titled Unite All Originals, brings together an exciting mix of bands, DJs, and artists with both local and international roots.

Adidas Collide, the first event, takes talents from different creative realms and combines their expertise to make something entirely new. Hong Kong is the first city for the series to take place and it pairs local 3D artist Grace Tang with Sao Paulo street artist Flip, and remixer / producer, Daniel Disaster from Atlanta.

In addition to the Adidas Collide event, which takes place at a pop-up gallery in Sheung Wan, there will also be two additional nights of music and culture. Details follow below.

Damon Dash back in H.K.

Damon Dash is a prominent figure in New York’s Hip Hop scene and a key player in defining millennial-era Hip Hop. Having signed Kanye West and built Roc-A-Fella Records with Jay-Z, he is a veteran dealmaker and entrepreneur. His newest venture, DD172, revolves around the intersection of music, fashion, and entertainment, with an eye towards international markets.

Here’s a list of the events with more info:

Renamed for the event ‘Damon Dash’s Poppington Gallery’, the exhibit will feature 3D art by Grace Tang colliding with street art by FLIP. A second piece interacts with music by Daniel Disaster.

Flip is well known for painting monsters and mythical creatures, and Daniel Disaster has worked with the likes of T.I., Lil Wayne, Waka Flocka and others, so the collaborations should be interesting!

The soundtrack for the night will be provided by Beijing’s DJ Wordy, China’s three-time D.M.C. champion and New York’s DJ Boogaloogz.

The night will include footage of Damon Dash’s trip exploring underground music in China and will be followed by music from some of the talents he encountered. The event includes DJ Wordy plus special guests (rumor has it that a well-known band from Beijing will perform!) 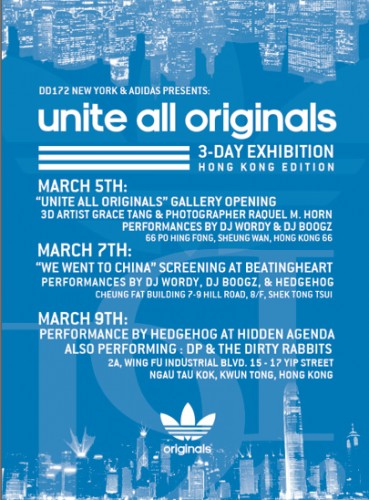