Unfortunately, I was stuck far from Central on Saturday night, and it looked like I was going to miss catching Danny Krivit, one of the top d.j.s and producers from New York, as he made his first appearance in Hong Kong. The club Dragon-i has been going into overdrive recently, booking many of the top, most influential d.j.s in the world. They have been bringing the biggest names in both House and Hip Hop music. On that note, I’m excited to catch pioneer M.C. Melle Mel from Grandmaster Flash and The Furious Five at the end of the month.

Luckily, I was able to get back to Central earlier than expected, so I decided to jump around the neighborhood. I started off attending a party at the new Armani Bar in Central. There’s a building on Chater Road that houses around six separate Armani entities. I’m not talking just clothing. They range from a florist and book store, to a furniture shop and now a restaurant/bar. The same space used to be a cafe several years ago, and it recently reopened in this new format.

When I got there they had an Italian House music d.j. spinning and dancers on two podiums grooving to the music. I only stayed about thirty minutes since it wasn’t that crowded. I decided to stop by Dragon-i before heading to Volar. I wanted to catch a little of Danny Krivit’s performance if possible.

Luckily for me, when I stopped by D.I. he was already on. The place was still filling up, but just by looking at him you could see that he loved his music. Despite it being early in the night, he was enthusiastically working the equalizers (bass, and treble) for different segments of the song. Clearly, he was going to be giving a big performance at peak time.

Volar was packed when I got there. The d.j. started off with some old-school Hip Hop, and went into a long Brasilian Funk set. Later he played a mixture of Hip Hop and Dancehall music.

Volar is divided into two rooms, with two different d.j.s playing at once. If Volar was a boat, last night it would have capsized, because the whole club rockin’ on one side! The d.j. killed it until 4:30 am, when they asked him to stop the music because there was no one on the other side of the club!

Afterwords I decided to head back to Dragon-i to see if Danny Krivit was still spinning. I got there at nearly 5 am, and sure enough he was still tweaking the e.q.s. There were less than ten people there, but they were feeling his vibe and he continued to kick it. That’s a real d.j.! 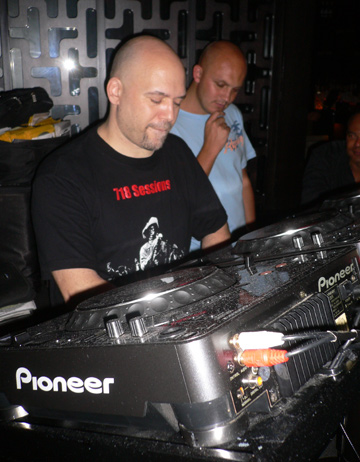