The smell of spray paint was in the air as guests paid their last visit to the old Volar in Hong Kong’s Lan Kwai Fong nightlife area. The club, which recently celebrated its 8th anniversary, is closing for a major renovation that will last several months.

The interior was looking like a 1980’s New York subway car with the addition of farewell graffiti spray painted in the hallways. 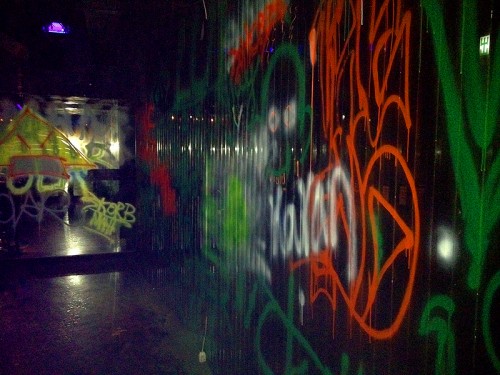 Back in 2005, when Volar first opened, Hong Kong’s nightlife landscape was very different. The nightspot, which has a full-time club feel, stood out from other places in Lan Kwai Fong due to its sparse decor and more modern, international vibe.

Divided into two rooms, it featured primarily electronic dance music on one side and Hip Hop on the other. Although it has had minor alterations in the past, it has never had a major overhaul until now.

Since its inception, Volar has been, without a doubt, one of the best clubs in the city. At its peak it hosted major international music acts just as they were emerging. Along with Dragon-i, the two clubs formed the backbone of Hong Kong’s international nightlife scene. (Read more on that in ‘Two Clubs That Changed Hong Kong‘.

Recently, clubs in general have become somewhat less popular, even as the number of them has increased exponentially.

One negative about nightclubs is that they tend to have only three big nights per week, with slower business the rest of the time. Having to pay Hong Kong’s high rents based off of just three nights a week is difficult. In fact, several of the city’s newest clubs have already shutdown, or are closed for adjustments including Gala’s and Mella.

Hong Kong’s nightlife demographic has also changed. The city now has a sizable population of foreign students that didn’t exist just a few years ago. In fact, the amount of foreigners heading to Lan Kwai Fong appears to be much greater now than at any time over the last ten years.

It will be interesting to see what the new Volar has in store. The Buzz Group’s recent properties, Lily & Bloom and Socialito, both have strong design elements. Stay tuned for an update in a few months!

8th anniversary, is closing for a major renovation. " />