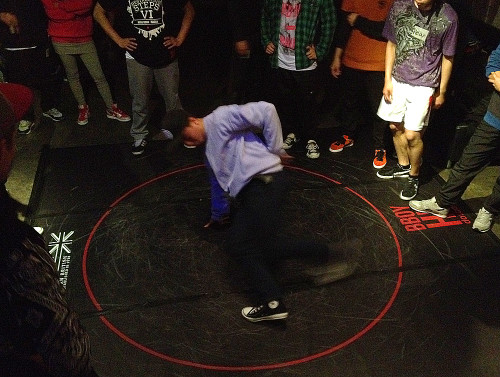 The Hong Kong breakdance scene is no joke! Saturday’s dance battle organized by Bboy HK brought out the city’s best dancers and featured moves that you’ll need to watch in slow motion in order to understand.

The complexity of the routines was just one of the factors that added to the amazing spectacle of the night. Breakdancing, or b-boying (for purists) is a combination of style, showmanship, speed, personality, creativity, form, and humor.

Battles are exciting to watch, as the crews constantly taunt each other and attempt to humiliate their rivals through gestures and dance maneuvers.

Each group has a different side of the floor and directs their insults towards the opposing crew.

Watching the full battle for three hours never got boring as the individual dancers each demonstrated special techniques and moves.

The average skill level was very high and the routines were extremely tight. Because the teams featured three members each, occasionally incredible dancers still didn’t make it to the finals.

A few differences between the old school days and the dancers of today became apparent.

There is now no downtime during a battle. The dancers are in constant motion and even the slightest pause during a routine is now stylized. Previously, dancers would take a little bit of time in between big moves. That time has now been optimized so that there is almost no filler during the entire performance.

In the old school days, someone’s shoe would inevitably go flying off during a crazy dance routine. (The fat shoe laces that were popular at the time were cool looking, but didn’t hold your shoes on very well!) Luckily, there were only a few hats flying off on Saturday! 🙂

Another major difference is the power of the Internet. In the age of YouTube, dancers in Paris can see the latest moves from dancers in Korea and Brazil. This globalization of b-boying has both positives and negatives. On one hand, the moves that were exhibited on Saturday night were a melting pot of the best maneuvers created over the past 35 years. But sometimes a highlight reel lacks the elegance and cohesiveness of someone who has been able to hone their own individual style untouched by the zeitgeist.

Congratulations to all the talented crews that competed including: Mind, Joka, Revolution, Wipwnyo, EOP,Â  Skillz 2 Kill, Crossover, and Floor Skillz.Â To keep up with the B-Boy scene in Hong Kong, check out the Bboy HK site, and also visit their YouTube channelÂ for videos.

The official re-cap video from Destructive Steps Hong Kong is incredible too!