After attending a party for Shanghai Tang in Hong Kong last month, all of a sudden I’ve been getting tons of offers to check out shows. The people that are contacting me are mostly event companies. Luxury brands hire these firms to organize their fashion shows and launch parties. Because Hong Kong is such a wealthy market and because China is such a huge growth market for luxury items, there is a constant stream of events every week in Hong Kong, and now in major cities in China like Beijing and Shanghai as well.

A few weeks ago I got an offer to attend two events in Beijing. One was a Ferragamo fashion show in The Forbidden City, and the other was a fashion show for the British brand DAKS. My schedule was to arrive in Beijing on Thursday around noon time, drop off my luggage and then head to The Forbidden City. My flight left H.K. at 9:15, which is a little on the early side, especially since I got asked to go to my friend Imani’s going away party on Wednesday night. (It ended up going til 1:30, and I didn’t sleep til much later.)

At Imani’s party the d.j. used Scratch Live, a new hardware / software package for playing music with a laptop connected to turntables. I just heard about it a few days before and hadn’t had a chance to check it out. It performed well at the party.

Anyway, my taxi driver dropped me off way too early for the special entrance to Tai Miao (the building where the party was,) and I had to walk for 10 minutes before getting to the venue. This was a total hassle.

Despite the hike, I found the alley way that led to the back entrance of the venue, and followed the sound of music to lead me to the correct spot. 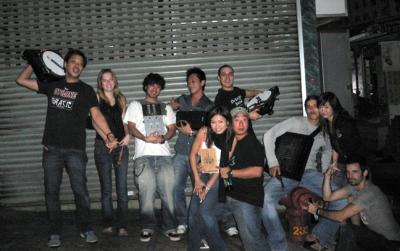