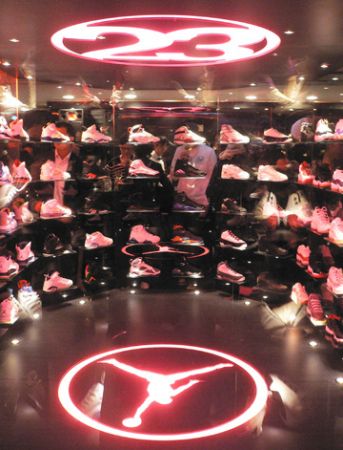 To celebrate the opening of their shop on the corner of Canton Road and Haiphong Road in Tsim Sha Tsui, Nike held an event for their Michael Jordan line titled “Respect the Legend of 23.” The number ’23’ refers to Michael Jordan’s basketball jersey number which often appears on his shoes. The centerpiece of the event was a massive exhibition of Air Jordan’s. How many pairs of Air Jordan’s does it take to fill a room?

The new Nike store is located at one of the major pedestrian intersections in Tsim Sha Tsui. It’s on the main high-traffic route that allows you to traverse from the western side of T.S.T. to the central part close to Nathan Road.

Canton Road, where the shop is located is also home to a series of shopping malls including Harbour City. On the opposite side of the street you’ll find upscale shops such as Louis Vuitton and a branch of Lane Crawford.

Silvercord, the shopping mall which the Nike shop anchors, contains many fashion-oriented stores including an I.T., a D-MOP branch, and other trendy clothing and accessories retailers.

The event was supposed to run from eight until twelve. Arriving at the store at 9:30 pm there was a crowd milling around outside.

The event was held on the second and third floors of the three-story shop. The second floor held the sneaker exhibition which was built into the walls of the room and also occupied a large round glass casing that formed a nucleus in the center of the room.

I’ve never seen so many Air Jordan sneakers! There were 230 pairs on display featuring a wide variety of styles and color variations.

Sneaker nerds were in heavy attendance, congregating in corners to discuss the rare models.

The room was packed with people.

I did a few circles around the exhibit before heading up to the VIP room on the third floor. Along one wall was an additional display containing a full collection of Air Jordan baby shoes!

I had no idea the line was so expansive! There was other memorabilia on display including a Nike basketball signed by Michael Jordan.

The Ultra Lounge crew featuring DJ Kulu, DJ Ivan, a drummer and an M.C. were tucked into one corner performing.

Celebrities including a few film and music stars were hanging out having relaxed drinks.

When I left the event at around eleven the place was still going strong.