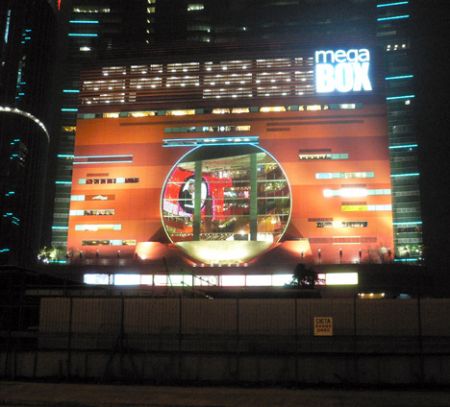 My first experience with MegaBox was a mad dash during rush hour to catch a film playing in the shopping center’s IMAX theater. I was so excited to make it in time for the movie (and get seats) that I didn’t have much of an opportunity to explore. Since my friend felt sick after the film – yeah the 3D was THAT good – I had to go straight home afterwards. I made a mental note to return and spend more time looking around. Recently I had a chance to go back and take a few photos.

Because I’m slightly different from normal people, I walked to MegaBox from APM, another relatively new shopping center in Kwun Tong on Kowloon’s Eastern side. The area between the two shopping centers is basically a no-man’s land without much in the way of scenery or sidewalks! Lots of old industrial buildings make up the barren stretch of Kowloon Bay where the complex is located.

MegaBox with its bright, shining lights and multi-colored facade stands out like an oasis. A central design factor that adds to the visibility is the massive eight-story see-through porthole that lets you check out the mall’s interior from blocks away. But what exactly does MegaBox offer?

Inside the mall are many banks of elevators and several different long-haul escalators that whisk you up to the shopping center’s tenants. The floors are divided into sections: Entertainment & Restaurants; Family & Lifestyle; Home Improvement; and Fashion.

Many of the stores tend to be over-sized replicas of shops elsewhere in Hong Kong. There’s also a home furnishings store something like a localized Ikea. The “international-sized” ice-rink in MegaBox is one of the largest in Hong Kong. When I walked by I saw them cleaning the ice with a regulation-sized Zamboni!

My favorite feature of the mall is definitely the IMAX cinema on level eleven. There are other IMAX and large screens in the city, but the one in MegaBox is five stories high and shows popular movies.

Several of the top levels above the theater contain restaurants, banquet halls and a health club. Walking from floor to floor the complex itself is enormous.

The cascading digital displays that dangle several stories high are a cool decorative touch that match the style of the building.

There is also a gigantic video display surrounded by lights which further accentuates its size.

It’s easily visible from the porthole at the front of the building. The screen is very futuristic and adds something to the feel of the complex.

It’s possible to get to MegaBox by MTR, and there is a free shuttle bus that runs regularly from the Kowloon Bay MTR station. I didn’t find it too difficult to walk there, but the shuttle is definitely helpful and takes the guess work out of which direction to go.

The shopping center is up and running, but it feels like MegaBox is still catching on. The fact that it’s not located in a major transit hub means that it needs a reason to become a destination. Though there are large stores inside, nearly all of the offerings can be found elsewhere.

With the old Kai Tak airport being redeveloped nearby and many old industrial buildings still taking up space, look for this area to undergo further development in the near future.

For more details, check out the official MegaBox website.