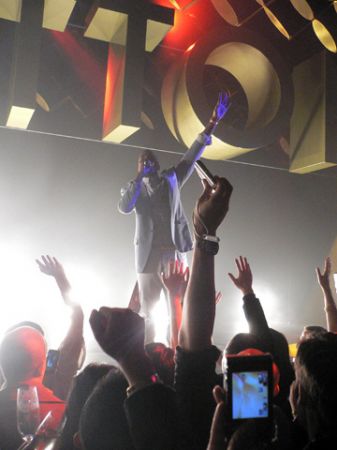 Friday night Louis Vuitton celebrated the grand opening of their largest flagship store in the world with a star-studded mega-party filled with celebrities and topped with a performance by Kanye West.

My expectations for the LV event were extremely high. Louis Vuitton is known to go all out for their parties. People still talk about their lavish anniversary celebration several years ago when they built a large structure on Tamar site in Admiralty. A grand gala is justifiable. Hong Kong is a huge market for LV products and their previous shop on Canton Road is said to be one of their most profitable branches in the world.

Arriving at the LV store at 5 Canton Road in Tsim Sha Tsui, there was a crowd of several hundred press and onlookers gathered outside the entrance.

The thick invitation in a small gold folder made it nearly impossible for someone to forge.

Gatecrashers didn’t have a chance. After two checkpoints, I walked in smoothly and entered the shop.

The lights inside were up to their fullest which brought out the dazzle in the gold-themed outfits covering many of the guests.

For a nightlife guy like me it was a bit bright! I walked around bumping into different friends for the first ten minutes before heading up to explore the other levels of the multi-tiered store.

After a few minutes I decided it can’t be called a store, it’s more like an LV shopping mall! The new Louis Vuitton shop is nearly equivalent in size to Hong Kong’s major department stores. It fittingly deserves the title flagship.

Tucked away on one side of the third level was an exhibition of photographs by Hong Kong movie star Chow Yun Fat titled “Moving Pictures”.

I’ve heard about his photography prowess for years and I was curious to check out his work. After a brief look I’m planning a second trip back to spend more time viewing the images in detail. One quick word – impressive!

The store was just too much to take in all at once. Just when you thought it would end, there would be another staircase or hallway leading to another area or display. It’s remarkably large even for a luxury goods haven like Hong Kong.

After about thirty minutes perusing the stock, I followed the trail of party-goers out the back end of the shop, through the attached shopping mall and onto the street to catch a small shuttle to the nearby party venue.

For most guests, the party location was something brand new. However, Hong Kong Hustle readers would have recognized the site of the event as the West Kowloon harbor-front promenade. Out towards the water there was a huge structure set up just for the special occasion. Projections from all angles were morphing the walls into various images including a signature LV trunk and a massive LV commercial.

The complex was stunning with the Hong Kong Island night-scape in the background.

Entering the party after another LV photo-op wall, the space was enormous! Besides a huge main room with cathedral-high ceilings, there was a long stage set up on the left side and three elevated areas – two for high-profile guests and one for the d.j.

VIP guests from throughout Asia mingled with Louis Vuitton executives on one of the elevated platforms. The other side was filled with Hong Kong socialites and their progeny. In the middle, the d.j. booth was lit up in a constantly changing light display.

In back of the booth was a large bar leading onto a crowded outdoor patio.

The view of the skyline from here was breathtaking. I spent the night wandering between sections.

The venue was impressive not only for its size but also for the attention to detail. Dangling from the ceiling were fixtures done up in the characteristic LV charm-shaped pattern.

The stage was the longest I’ve seen in Hong Kong. Suspended above it were massive letters spelling out LOUIS VUITTON. This was smart branding. Any photo taken of the action on stage was bound to contain the full name or at least a letter!

The first entertainment for the night consisted of ballerinas performing a dance number.

It was followed quickly by a troupe of agile French parkour practitioners, who bounded around, above and through the letters.

After a pause, a familiar sounding instrumental came on which lead into Kanye West’s performance. The crowd erupted when he took the stage. Kanye played a tight set that had him running from one side to the other. His energetic performance combined with his constant hand shaking with the crowd won him even more admirers. The set lasted for nearly thirty minutes. The entire age range of the crowd seemed to be enthralled by his performance. (I nearly got knocked over by an older woman attempting to rush in front of me towards the stage!)

When Kanye’s performance ended, the party continued on for several hours more. There hasn’t been an event of this size in Hong Kong for a long time and judging by the good vibes during the night, the diverse crowd made the most of it.

To read my previous post about the strategy behind this type of event, go here.