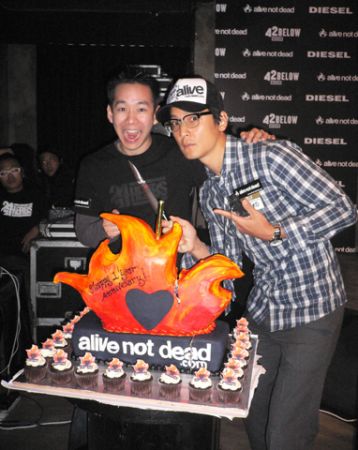 It was a night to remember, but probably one that will only be recalled in bits and pieces for some of the Alive Not Dead gang that attended.

Sunday night’s anniversary took place at club Cliq in Central. It began with a media presentation that included the members of the band ALIVE. 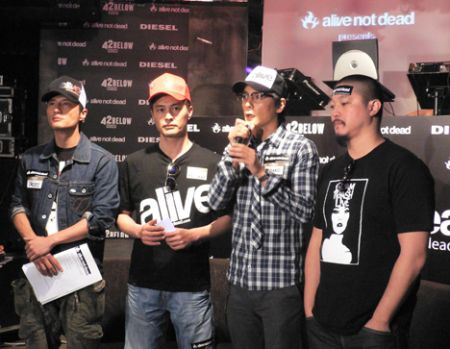 The group was originally assembled for the film The Heavenly Kings, a mockumentary about Hong Kong’s entertainment industry. Group members Daniel Wu, Terence Yin, Andrew Lin, and Conroy Chan gave a brief recap of the history of Alive and how it transitioned into its current form, www.alivenotdead.com. Patrick Lee, CEO of Alive Not Dead was introduced next and he presented the team responsible for creating the site.

Alive Not Dead (often abbreviated as AnD) is a social networking website whose nucleus is formed around leading arts and entertainment figures. The site provides the opportunity for artists to interact with one another and discover potential people to collaborate with. It also provides a way for fans to communicate more directly with stars. The two-tier system allows both artists and fans to introduce their work to the community. The site features blogs, photo albums, events listings, bulletin boards and a messaging system. Though it started with Hong Kong based talent, it’s branching out further and further each week. The site includes both established names and up-and-comers. For example, international movie star Jet Li is a member of the site. He has a regularly updated blog that features information about his new films and charity projects. 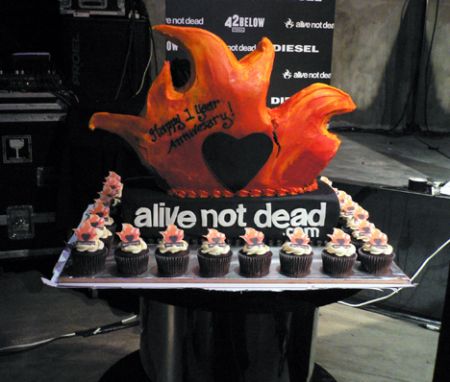 On Sunday night a special cake in the shape of the logo of Alive Not Dead was presented. A video highlighting some of the online community’s accomplishments over the past year was also debuted. Artists, entertainers, and personalities on the site created short clips that were compiled into two videos wishing AnD a happy birthday.

You can check out the stars’ birthday videos here:

Starting at ten o’clock Alive Not Dead fans mingled with the site’s artists. Many members got to meet one another face to face for the first time. In addition to Hong Kong, AnD members came from Japan, Taiwan and China. The night featured performances by several of the site’s Hong Kong based talent including d.j.s, bands and m.c.s. Highlights included a performance by 24 Herbs, an action-packed set featuring M.C. Goldmountain, Ink and M.C. G., and the sounds of D.J. Miss Yellow.

The food prepared by Dan Seagall, the head chef of Zuma was a major hit in the VIP room. At one point you almost needed to elbow your way in as several girls hovered in a constant grab and eat frenzy!

The memory gaps in the night might have something to do with the popularity of 42 Below vodka as a substitute for beer in the beer bong. As usual, pan-Asian entertainment figure and Racks cofounder Min was at the epicenter of the drinking festivities.

If you had coffee flavored tequila poured into your mouth during the night, chances are he’s to blame.

What started out primarily as a channel for misinformation for a mockumentary, has morphed into something way beyond its original purpose. Just celebrating its first birthday, Alive Not Dead has become a significant force in the international Asian entertainment scene. Mixing grassroots elements with a savvy internet approach, Alive Not Dead is a site to watch.

Congratulations to the entire AnD team, wishing you continued success in the future!