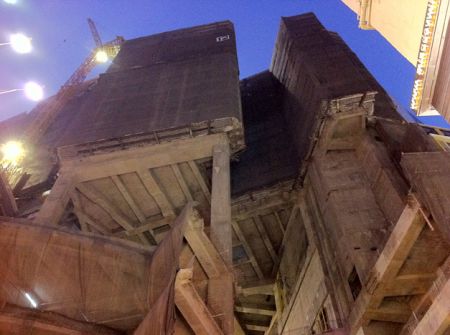 Could the new Hysan Place shopping center be the address of the first official Apple store in Hong Kong? Located at 500 Hennessy Road, just across from Sogo, Hysan Place occupies the former site of Hennessy Centre.

The older complex, which housed the Japanese department store Mitsukoshi, was forty-one stories tall, but lacked a good layout for retail space. Hysan, the leading property developer in Causeway Bay, dismantled the old building, and has rechristened the location Hysan Place.

The new building, which is scheduled to open in 2012, will feature 15 floors of retail space, including a 45,000 square foot DFS store! Word on the street is that the Apple store will be another major tenant.

Though there was speculation about the official Apple store opening in IFC in Central, a Causeway Bay store has its advantages.

While IFC is a premium location, a shopping mall in Causeway Bay will have much higher foot-traffic throughout the day. Also the wow-factor of being a corner-stone in a new shopping mall will result in an explosion of traffic.

According to Hysan’s press release, there will even be a new MTR exit leading directly into the complex. This is important, as the current nearest location, exit F of the Causeway Bay MTR, is subject to constant pedestrian congestion.

For many years Apple users were a tiny minority of the Hong Kong population. Apple products and peripherals were so niche that you felt like part of an underground subculture just going to buy something at the handful of small shops around town. If someone else walked into the store, you would size them up and wonder who they were, and why you didn’t know them already.

Those days are long gone. iPhones and iPads are ubiquitous in consumer electronic-crazed Hong Kong. A simple ride on the MTR will make you feel, well, quite ordinary. A quick look around will confirm that a good percentage of the riders are immersed in their iPhones. (I strongly believe that Hong Kong has more iPhones per capita, than anywhere else in the world.)

The change of Apple from a computer company to a consumer electronics powerhouse has brought the elegance of their products to a much wider audience. But for all the remarkable growth and success that Apple has had in Hong Kong, the city has still lacked an official temple.

Even our neighbors to the North have several official Apple stores now, with plans for a massive expansion. Yet for all our sophistication, we’ve been deprived of the pillar of the Apple community, with no place to camp out for the latest launches.

A Hong Kong Apple store is long overdue, so the unconfirmed rumor of one opening up in Causeway Bay is exciting!

If indeed true, the address will be: