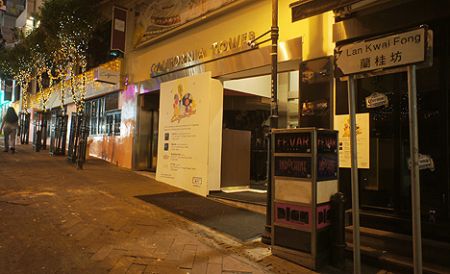 Sometimes it’s just plain sad to see things go. Although there’s not much room for nostalgia in this fast-paced, land-scarce city, certain places have been around for so long that you think of them as landmarks and it’s difficult to imagine them ever leaving. The demise of California Tower and the California Entertainment Building in Lan Kwai Fong, both cornerstones of Hong Kong’s nightlife since the early 80’s is one such case.

A whole chapter of the city’s nightlife was written in the California Entertainment building and its neighbor, California Tower, which are set to be demolished later this month. The two will be replaced by a twenty-five story mixed-use tower.

Lan Kwai Fong will never be quite the same. The transition is guaranteed to reshape Central’s nightlife once again, and in the mean time, make the partially pedestrian area one huge mess.

While he wasn’t the first to open a modern nightlife offering in the area, (I believe that distinction belongs to Gordon Huthart’s DD’s in late 1978,) Allan Zeman was the pioneer who envisioned and triumphed in making an entire entertainment district out of Lan Kwai Fong. Built on the success of his first venture, California, which he opened in 1983, Zeman expanded, buying up spaces around the block.

Everyone has memories of the famous corner, where tourists often flock to have their photo taken next to the Lan Kwai Fong street sign.

Once, while partying at C Club, in the basement of California Tower, I actually bumped into Tony Leung Chi-Wai.

On a related note, check out the post about Midnight Express from Chung King Express being transformed into a 7-11.

Farewell California, you will be missed, but not forgotten.