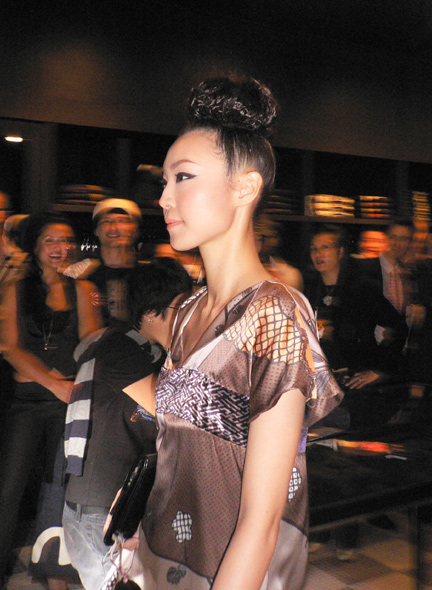 Last Thursday I attended the opening of Evisu’s second store in Hong Kong. This branch is in Ocean Terminal, a large shopping mall located directly on the harborfront in Tsim Sha Tsui.

I had received the invitation in the mail and planned on checking it out. The invite really caught my attention. Inside of a large red envelope was the back pocket from a pair of Evisu jeans. One side had the event information, the other carried their signature character. 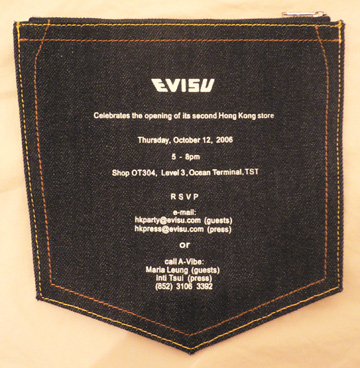 Arriving at Ocean Terminal I found the shop which was located right around the corner from Ralph Lauren. It’s interesting that they opened the shop here, instead of in the more youth oriented area of the mall called LCX.

Entering the shop, which was already crowded with people, I heard an announcement that the show was about to begin. I moved towards the front to get a good position, just as my friend, model Carrie Chiu started to walk.

The show lasted around ten minutes and featured several models walking and a group sitting around in Evisu clothing. Several celebrities in attendance were also decked out in Evisu gear. This is a common practice to showcase a designer’s clothes – pay celebrities to attend your show wearing your new line. The media will photograph stylish, well-known people present at events and it helps to create a buzz.

After the show I hung around and chatted with some friends. The crowd consisted of fashion editors, street-wear designers, Nike people (who work upstairs,) the artist Simon Birch, D.J. Yeodie, D.J. Daryll, Cara Chan, Terence Yin, Carl Ng and Carrie Chiu among others. 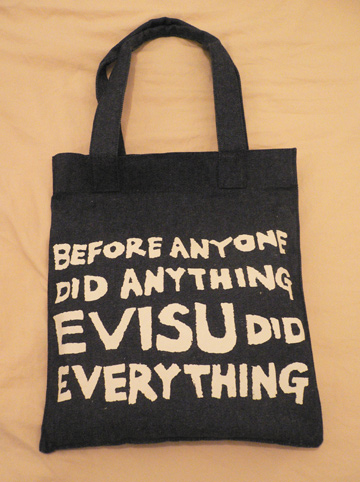 On the way out I picked up the Evisu goodie bag which consisted of a limited edition T-shirt, a shot glass, and an Evisu tote with the words ‘Before Anyone Did Anything, EVISU Did Everything’ printed on it.