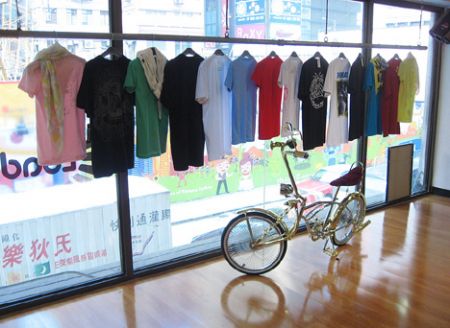 I’ve known about Loading since it opened up a few months ago, but I didn’t make it over until they held a special live painting event featuring Swedish graffiti artist Anna Fredriksson.

Arriving at their address on a weekend night, there was a large crowd of people standing around outside. On closer inspection they were waiting for tables at a popular sushi chain on the ground floor! 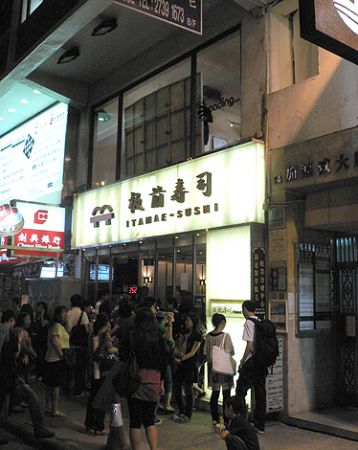 Looking up I spotted the store. I could see visiting artist Anna Fredriksson already painting in the window. I found the entranceway just to the right of the sushi place and proceeded up.

Loading is located on Granville Road, one of the more interesting shopping streets in T.S.T. Aside from the mini-malls, such as Rise Commercial Building and Stephen Chow Sing Chi’s gi Mall, there are also many shops occupying the upper floors of older buildings. Loading follows this model, taking up the first floor of 14 Granville Road. The location is on the first block off of Nathan Road, slightly away from the main strip which is dominated by discount cosmetic stores.

Entering the shop for the first time, the place has a crisp, contemporary feel. There are numerous displays neatly spaced on the floor and against the walls. 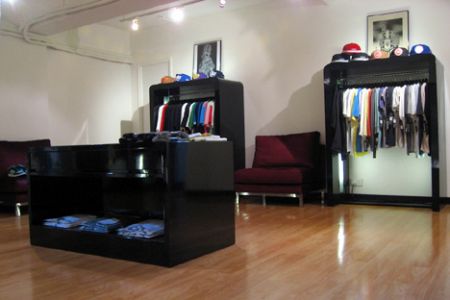 Contrasting with the shop’s clean look, the colorful selection of clothing really grabs you and makes you want to browse. Checking out the racks in between watching the painting, I was impressed with the selection. Loading carries smaller brands not normally found in Hong Kong. The owner’s got a partner in New York who helps procure the latest from new designers. Checking the price tags, I was also impressed with how reasonable the prices were.

When I arrived, Anna Fredriksson was painting two large figures in the front window.

She’s a graffiti artist who, among other things, has created graphics for H&M. As I walked in she was painting using a combination of spray paint and markers. 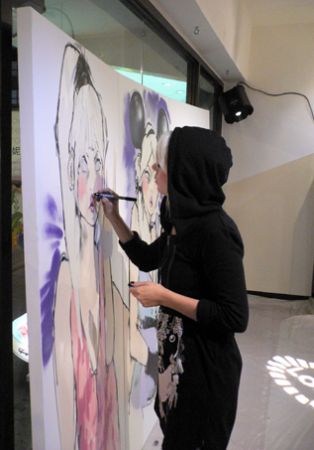 The two figures were almost in a fashion illustration style. She worked quickly (probably a skill developed from her graffiti background,) and the female faces took form as the guests watched. 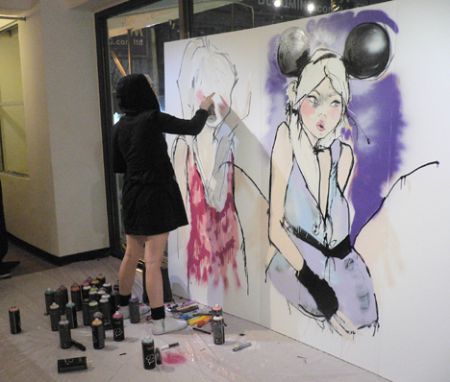 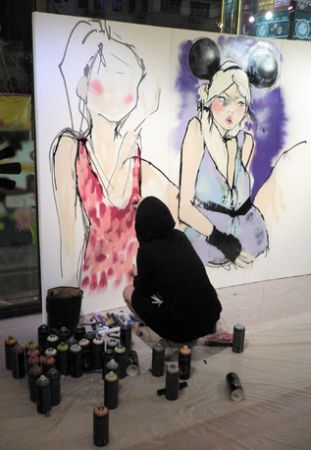 While many street wear stores in Hong Kong just focus on major brands, it was refreshing to find a new place with a broader selection. Boasting a long list of underground designers, Loading has clothing you won’t find anywhere else in the city. If you’re the type that goes home when you spot someone else wearing your same t-shirt, this place is worth a visit!