I’ve only been to the big Buddha, one of Hong Kong‘s top tourist attractions once. The last time was after no sleep on January first several years ago and I found the place over-rated. Commonly referred to as “the big Buddha,” the official name is the Tian Tan Buddha Statue. The big Buddha is located in a far-removed area called Ngong Ping on Launtau Island. It’s perched high atop a hill with a long straight staircase that leads up to the base.

Finding myself lured back to the statue last week, I decided to double check my first appraisal, as well as map out the best route, weighing transportation time, scenic beauty, safety, and fun.

There are multiple ways of getting to the big Buddha statue. The fastest route depends on your starting point and the amount of scenery you want to take in. I’ll use Hong Kong’s Central neighborhood as an example.

First, take the ferry from pier number six, just outside of the IFC mall. Look for the sign that says Mui Wo, Lantau Island. The ride time depends on whether you get an express ferry, or a slow boat. Another variable is if it is a weekday or public holiday. Once you arrive at Mui Wo, simply exit the ferry and you can catch the number 2 bus to Ngong Ping directly outside of the terminal. The number 2 is the first bus-stop closest to McDonald’s and 7-11. 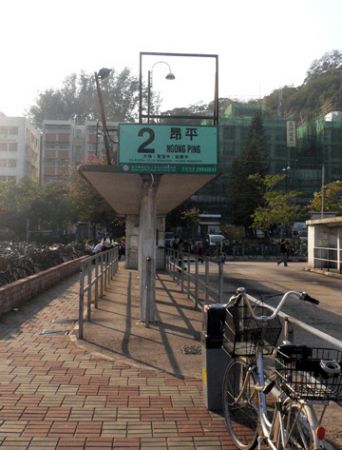 The cost is $25 HKD one way for an adult. The buses are clearly marked and easy to find both going and returning. If you like, you can take a taxi, which costs around $125 HKD one-way from the ferry pier to the big Buddha statue.

Another common way of getting to the big Buddha is by catching the Tung Chung MTR line from the basement of the IFC mall. You take the train until the final stop which is Tung Chung. Walk out of the station and take the number 23 bus to Ngong Ping, the site of the big Buddha. I haven’t tried this simply because the ferry ride offers a more pleasant experience than taking the train. It might be slightly faster, but it’s certainly less scenic.

The newest option you have is to take the infamous Ngong Ping cable car, from Tung Chung to the Buddha at Ngong Ping. Why is it infamous? The cable car has had several performance scandals in its short life including stalling with people trapped in the cars, and has even had an empty car fall to the ground! To me, that’s simply not excusable for a transportation service that’s open to the public – especially not in the early life of the system. As much as I’d like to take this ride, I’m reluctant based on its short history of performance. But as far as thrill and scenery goes, the cable car has lots to offer! The ride is around 25 minutes long and the views should be amazing. Not a good place to take someone afraid of heights though! 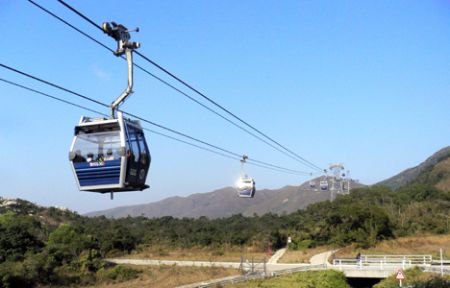 For more information about the Nong Ping cable car, have a look at the site here. At the moment it appears to only be running in limited service. You can catch the cable car by going to Tung Chung via MTR (as described already above,) and then walking to the Ngong Ping Cable Car terminal.

The bus ride to Nong Ping where the Buddha resides is around thirty minutes of hillsides, mountains, and ramshackle lots on Lantau Island. You might even spot a few brown cows lounging next to the road! If traveling by bus, sit on the right side and you will have a view of the Buddha perched on top of the mountain long before you reach the site. Look for it when you see a large reservoir out on the right window of the bus. 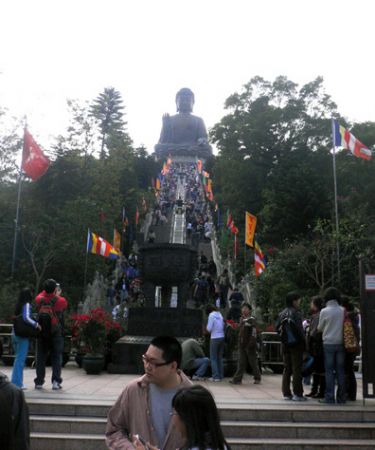 The bus completes its journey to Ngong Ping, dropping you off at the end of the line which is nearly at the feet of the long, steep staircase up to the statue. Those with walking impairments might want to consider whether they’ll be able to make the climb. Though I found it easy, it may be difficult for the elderly or the out of shape. A slow climb is possible. 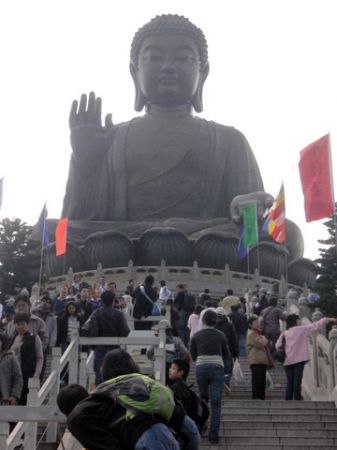 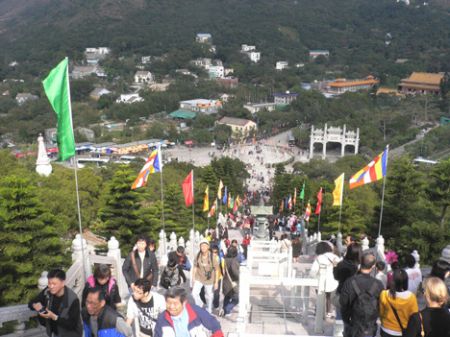 Arriving at the top I snapped a few photos. The sun was protruding over the shoulder of the statue making it difficult to photograph from the front. My favorite view was from the side, where I caught the blue sky as the background. There is a serene quality to the sculpture partly due to its massive size and simple lines. 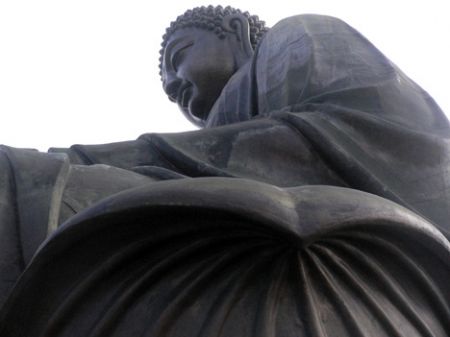 After the climb they have an indoor exhibition of some kind that I didn’t feel inclined to see. Part of the pleasure is just admiring the neighboring mountains from the statue base. 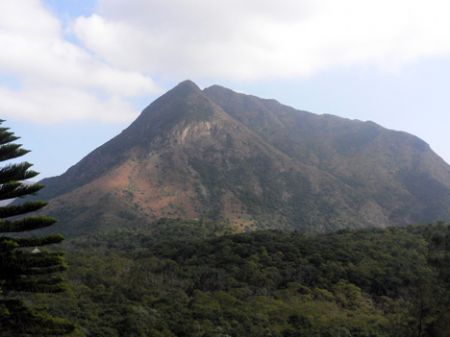 Descending to the bottom again, my friends and I decided to check out the adjoining monastery. 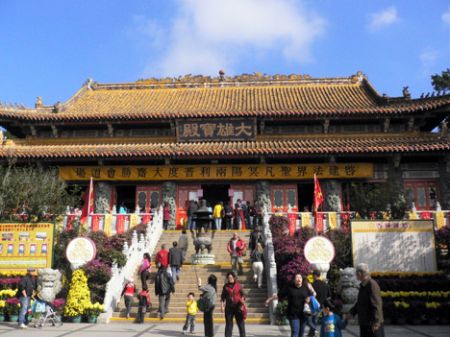 The big draw here seems to be the assorted food courts serving vegetarian cuisine. There are also several areas of worship with burning incense.

The biggest difference between now and the last time I visited is the development of Ngong Ping Village. The village is located just a block away from the bottom of the statue and the nearby monastery. Between the Big Buddha statue and the cable car terminal, a pedestrian street with low-rise buildings on either side has been built. Visitors are funneled between the cable car and the statue with ample restaurants, urban standbys such as 7-11 and Starbucks and tourist traps of different colors. 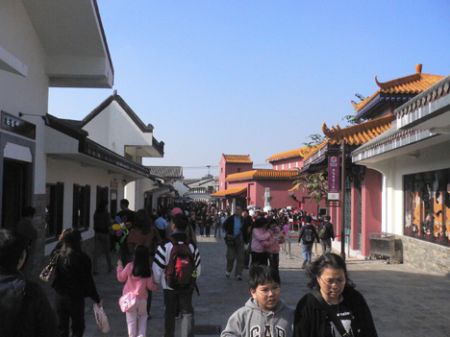 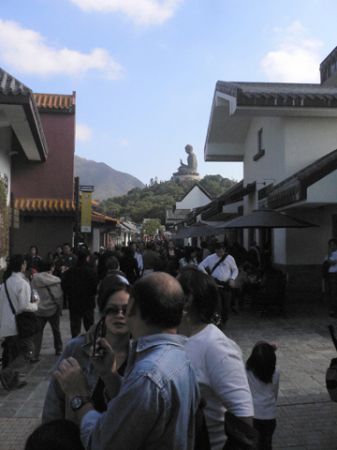 Meat lovers who find themselves un-satiated by the monastery’s vegetarian offerings now have a place to dine. 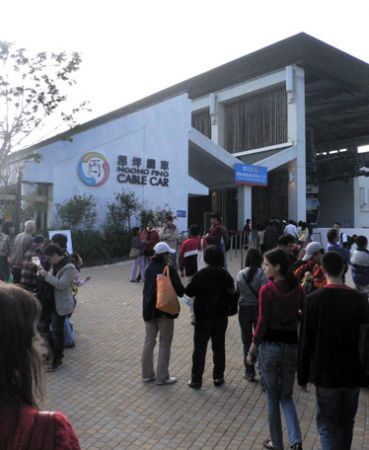 Despite my reservations about taking the cable car, I would have taken it back from Nong Ping to Tung Chung, however, getting on line at the place labeled “Ticket Sales,” we were told that tickets were only available in Tung Chung. Perhaps this means that only round-trips are offered, or possibly this limitation was due to the holiday.

Since there was five of us, and the bus cost $25 HKD per person, I decided that we should just take a taxi back to Mui Wo. Soon, one of the light blue taxis arrived near the big Biddha bus station and we jumped in for a swift ride back to the ferry. 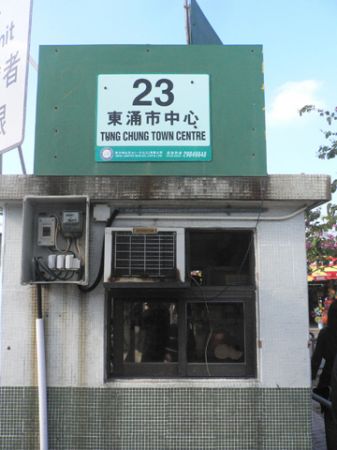 If you are so inclined, you can catch a bus in the same spot as you were dropped off. It’s best to have money on your Octopus card, or exact change, since they can’t take bills. Take the number 2 to head back to the Mui Wo ferry pier, or the number 23 to go to Tung Chung Centre, which will leave you next to the MTR station.

Despite the new offerings, I still feel like the big Buddha isn’t one of Hong Kong’s top sites. Especially due to the time it takes to get there and back, if you’re only in town a few days, your time would be better spent exploring the city’s vibrant urban landscape.