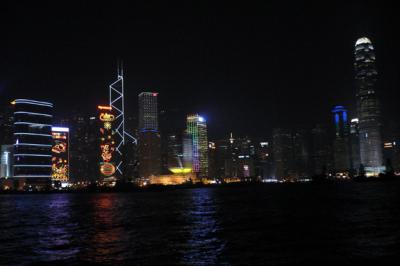 Hong Kong’s modern architecture is impressive enough on its own to make other cities jealous, but during the holiday season – sometime between December and when Chinese New Year takes place – around early February – the city turns it up a notch. This time of year, the lights have already gone up and the tall buildings are adorned with colorful holiday displays. We’re talking lights that go up 50 floors and higher. It’s beautiful at night, and it makes up for the lack of snow!

There are two areas that get particularly tricked-out – Tsim Sha Tsui East on Kowloon side, and the tall waterfront buildings from Central to Wanchai on Hong Kong Island. The buildings in T.S.T. East are shorter, but the tradition has been going on there longer, and there are whole blocks covered in lights. It’s worth a visit. If you take Star Ferry, you’ll have a great view of the lights on the Hong Kong waterfront.

This time of year reminds me of a boat party that I attended for Royal Elastics on a huge commercial ferry. It cruised around the harbour for three hours and it had amazing views of both the T.S.T. East and the H.K. Island displays.

Below is a new edition to the Hong Kong Island waterfront. It’s called AIG Tower, and it sits on the site of the former Furama Hotel. I watched this building go up over the last few years, and it’s got an interesting set of lights on one side and a large video screen on another side. Still not as crazy as a few of the buildings I saw in Pudong, Shanghai, but cool enough! In the background of this photo you can see the Bank of China building designed by I.M. Pei. It’s still holding it’s own – updated with those white lights. The lights are made to look as if they’re moving at night. It’s cool – looks like a 72-storey tall game of Tetris! 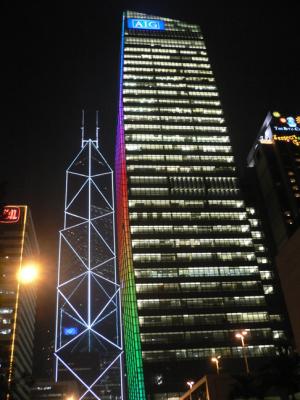