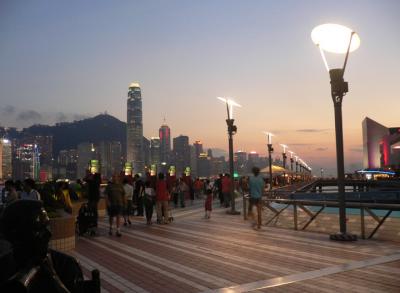 One of my favorite scenic sections of Hong Kong, the waterfront promenade in Tsim Sha Tsui, finally reopened after a few years of renovations. The walk begins at the Star Ferry terminal, and continues towards Tsim Sha Tsui East. Strolling along the harbor you are treated to breathtaking views of the skyscrapers of Hong Kong Island, with the mountains at their back. This is the view that greeted me on my first night in the city many years ago. No matter how many times you see it, it’s inspiring. Click on any of the photos to see a larger version. 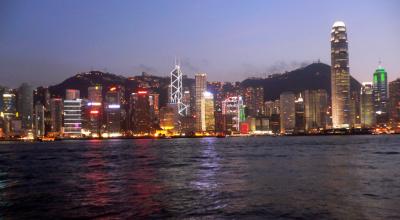 Added to the walkway recently is “Avenue of the Stars” an homage to the stars of Hong Kong’s once glorious film industry. Yes, it’s an imitation of Hollywood, but that doesn’t stop people from crouching down and taking photos with their hands in the mold of Jackie Chan’s. There’s even a statue of Bruce Lee.

If you’re a fan of Hong Kong cinema, you will be happy to spend half your time gazing down at the names that appear sporadically in the pavement. Even for those with no interest in the movies, the view along the waterfront is as captivating a cityscape as you are likely to find, so it’s worth a visit.

Located near the beginning of the Avenue of Stars is the Hong Kong Museum of Art. Across from the Museum lies the Cultural Center, a wedge-shaped building (where traveling plays and concerts are held,) and the planetarium.

Occasionally, you can even spot (and photograph!) an old ship in the harbor! 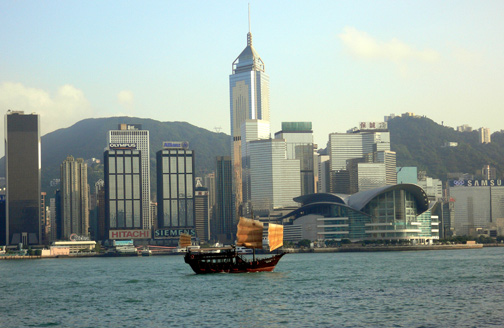