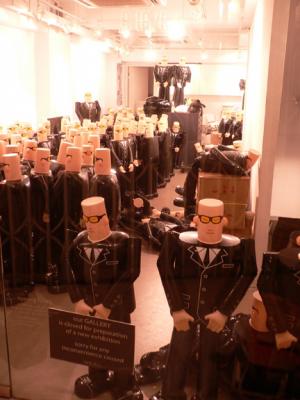 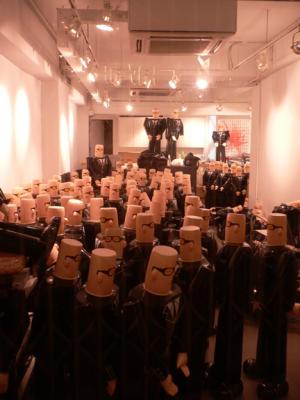 I was walking on the street one night past the Agnes B. gallery and I looked into the window and saw all these suitman dudes lined up. I grabbed the camera and took a few shots through the gate. Finally – a cool exhibition!

I walked past the gallery again a few days later and ran into Sean from Nike outside. He told me to stick around and check out the exhibition opening. I went home and dropped off my groceries, and went back to see what it was all about.

Basically, this guy has people all over the world dress up in suits and he photographs them. He also dresses up in a suit and takes photos in far away places. It’s been done before with other things, but it’s fun, and he has a sense of humor.

The gallery set up portraits of people in the signature suit upstairs, and downstairs held photos from his trips around the world. One interesting thing were the two giant suitmen in the basement gallery. We were told to be on the lookout for a special surprise. Being the New Yorker that I am I started making jokes about the two giant suited figures, guessing that they held the surprise. I joked that our recently relocated friend Imani was going to pop out of one of the suits… I was close! About an hour into the exhibition, a Michael Jackson remix came on, and the two giant Suitmen – each about 10 feet tall start dancing in a funky snychronized way. It was fun. 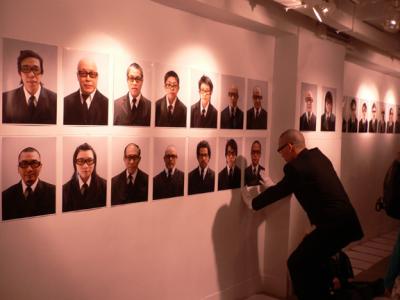 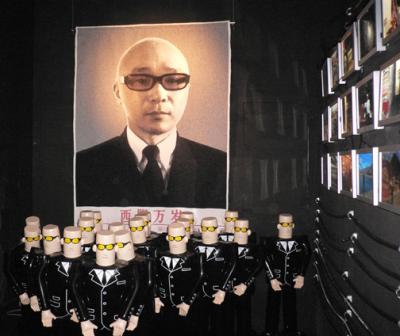 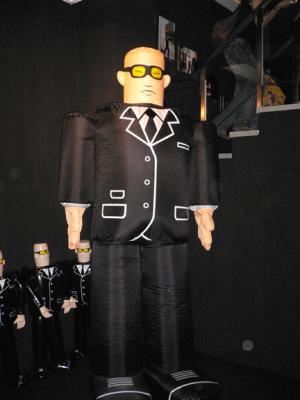